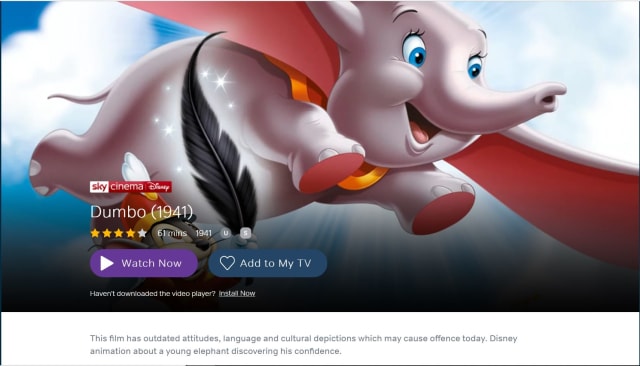 Films including Gone With The Wind, Flash Gordon and the animated version of Dumbo that are available on Sky Cinema now come with a warning that they contain “outdated attitudes, language and cultural depictions which may cause offence today”.

The channel, which is also available on Now TV, has added a disclaimer to a number of titles to warn viewers about issues of cultural sensitivities and potentially offensive attitudes.

It comes after streaming service HBO Max removed Gone With The Wind following criticism of its “racist depictions”.

The 1939 epic, set in the south of the US during the American Civil War, will return to the service with a discussion about its historical context and criticism of its “racial prejudices”.

The film told the love story of Scarlett O’Hara (Vivienne Leigh), the daughter of a plantation owner, and Rhett Butler (Clark Gable).

TV shows including Little Britain have also been removed from streaming services following criticism over the use of blackface.

The re-evaluating of films and TV shows comes amid global protests about racial injustice, following the death of unarmed black man George Floyd in the US.

He was killed after a white police officer knelt on his neck for more than eight minutes.

A spokesman for Sky said: “Sky is committed to supporting anti-racism and improving diversity and inclusion both on and off screen.

“We constantly review all content on Sky’s owned channels and will take action where necessary including adding additional information for our customer to allow them to make an informed decision when deciding what films and TV shows to watch.”

It is understood that the warning was also added to the 2019 live action remake of Aladdin starring Will Smith in error and the mistake is being rectified.

The warning was intended for the 1992 animated version of the film.