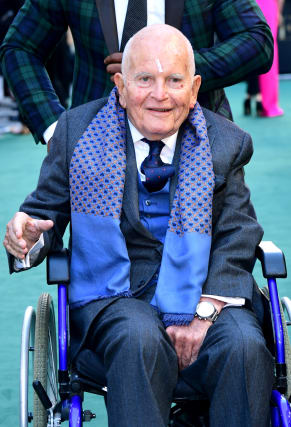 Frozen star Josh Gad has paid tribute to Sir Ian Holm as “the beating heart” of the Lord Of The Rings trilogy following his death at the age of 88.

Despite being unable to attend, Sir Ian, who played the hobbit Bilbo Baggins, sent a letter to his castmates.

Gad wrote on Instagram: “A few weeks ago, I got to read a letter from this beautiful man to his co-stars and partners from #TheLordOfTheRings on #ReunitedApart.

“To think that a mere 30 days later he is gone is heartbreaking beyond words.”

He added: “Bilbo’s journey with the ring would set up everything that would transpire and with a lesser actor, it would not have had nearly the same effect.

“With a legacy that includes Brazil, Time Bandits, The Madness of King George, Alien, Chariots of Fire, Ratatouille, and so many more.

“A legacy of so many life-changing adventures, thrills and journeys, all of which in turn made us all the more lucky and blessed to be a part of it.

“Peace to you on your greatest adventure yet Sir Ian.”

The artistic director of the Royal Shakespeare Company, Gregory Doran, described Sir Ian as “one of the RSC greats”.

The acclaimed actor joined the Stratford-based theatre company in 1958.

Mr Doran added: “Ian perfectly expressed the cross-fertilisation between classics and new writing that Peter Hall forged in the early days of the RSC.

“He had a simmering cool, a compressed volcanic sense of ferocity, of danger, a pressure cooker actor, a rare and magnificent talent.

Actress Mia Farrow recalled her experience of working with Sir Ian during and RSC production of The Iceman Cometh when he developed stage fright.

“Awful news that Ian Holm has died,” she said, adding: “He was among the giants of the theatre.

“We met while working at the RSC where, mid-performance of Iceman Cometh, terror seized him and he left the stage – for 14 years.”

She added that he was an “unfailingly brilliant” actor.

He added: “Wonderful actor and it’s so sad to see him go. Farewell, you did great work Sir.”

It said: “We’re very sad to hear that Ian Holm has passed away.

“He was an extraordinary actor and we have wonderful memories of his performance at the National Theatre as King Lear.”

Bafta said in a statement that they are “very sorry to hear of the death of Ian Holm”, while comedian Robert Webb described him as a “splendid actor”.

Actor Reece Shearsmith said that Sir Ian had “a lifetime of incredible performances”.