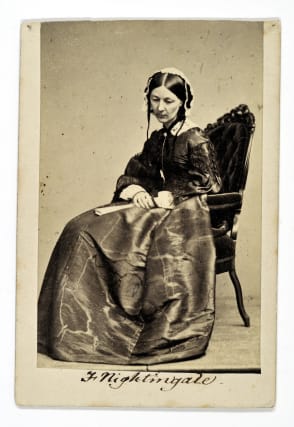 An online auction raised more than £18,000 for the Florence Nightingale Museum, which is struggling amid the coronavirus pandemic.

The central London attraction, which celebrates the one of the most famous figures in nursing history, is under threat because of Covid-19.

An auction was held on Friday, hosted by TV auctioneer and Bargain Hunt star Charles Hanson from his Derbyshire auction rooms.

Included in the 95 lots that went under the hammer was a VIP tour of the Churchill War Rooms (£940), a weekend stay at Nightingale’s family home in Derbyshire (£820) and a guide to 10 Downing Street signed by Prime Minister Boris Johnson (£490).

And a set of children’s nursing scrubs donated by England’s chief nursing officer Ruth May and signed by TV’s Dr Ranj Singh sold for £100.

David Green, director of the Florence Nightingale Museum, said: “Charles Hanson and his team have showed terrific commitment to our cause, battling technology glitches on the night to raise an astonishing amount for us.

“The museum is battling for survival at the moment and tonight’s auction has really helped to raise awareness of our campaign, as well as significant funds.

“We are extremely grateful to all donors and bidders for their support tonight and also welcome anybody who would like to get involved and join us on our ongoing campaign.”

The Florence Nightingale Museum, an independent charity, was in the early stages of a year of celebrations to mark the 200th anniversary of the nurse’s birth when the pandemic hit.

The ensuing lockdown has had a catastrophic impact on the attraction.

The museum is continuing its fundraising campaign. To make a donation, patrons can visit the museum’s Go Fund Me page.