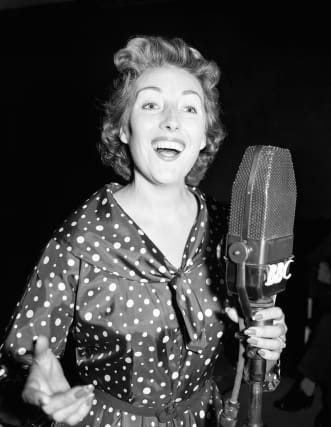 Forces sweetheart Dame Vera Lynn produced a catalogue of music that inspired British servicemen and women at home and abroad.

Here are some of her best-loved hits.

Dame Vera's breakout song was written in 1939 at the outset of the Second World War by popular composers Ross Parker and Hughie Charles.

Its lyrics were a message of hope and comfort to those who feared they would never see their loved ones again, and buoyed Dame Vera's burgeoning career.

It inspired a popular 1943 film of the same name, which saw Dame Vera play a fictionalised version of herself – a young singer who cheers British soldiers with her voice.

The song still resonates with those who lived through the war.

– (There'll Be Bluebirds Over) The White Cliffs of Dover

On a clear day, Britain's towering white coastline could be seen by servicemen across the English Channel fighting in France.

Composed in 1941 by Walter Kent to lyrics by Nat Burton, The White Cliffs Of Dover was an ode to those cliffs that symbolised home.

Dame Vera popularised the song with her version, and it became one of the best-known Second World War standards.

Its lyrics refer to pilots "braving those angry skies" and describe the "light of hope in their eyes".

– A Nightingale Sang In Berkeley Square

Stars including Sir Rod Stewart, Frank Sinatra, Bobby Darin and even Twiggy have recorded versions of this popular love song.

But it was Dame Vera's version that captured the hearts of the British listening public, indelibly linking it with the Second World War.

The tune was written in the small French fishing district of Le Lavandou, shortly before the outbreak of the Second World War, and refers to one of Mayfair's large leafy squares.

– There'll Always Be An England

Written by the duo behind We'll Meet Again, There'll Always Be An England is perhaps Dame Vera's most overtly patriotic song.

With lyrics that reference the Empire, country lanes, and cottages tucked beside fields of grain, it carried a message of hope to servicemen abroad.

In a satirical twist, 70s punk rockers Sex Pistols came on stage to the tune, and named one of their live DVDs after it.

With this song, Dame Vera became in 1952 the first foreign artist to reach number one on the US Billboard charts.

It was written by German composer Eberhard Storch around 1950, for his wife who was confined to hospital with a long-term illness.

The story goes that Dame Vera was on holiday in Switzerland when she heard people singing the song in a beer parlour.

When she returned home to England, she recorded the track with the soldiers and airmen of HM Forces and the Johnny Johnston Singers.