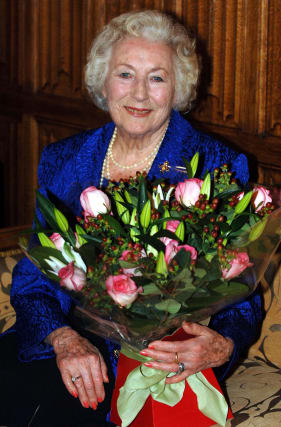 Dame Vera Lynn’s daughter has said she is proud of the difference her mother made with one charity in particular which had “a very special place in her heart”.

The Forces’ Sweetheart was founder and president of the Dame Vera Lynn Children’s Charity.

It helps young children with cerebral palsy and other motor learning difficulties to “get the best possible start to life”.

The late singer’s daughter, Virginia Lewis-Jones, the charity’s vice president, said her mother made a difference to the lives of many families.

Anyone who would like to make a donation in Dame Vera’s memory can do so through the charity, she said.

“My mother first became involved in raising awareness of cerebral palsy in the ’50s when there was very little understanding of the condition and children who suffered from motor learning difficulties were often referred to rather pejoratively as ‘spastic’,” she said.

“Along with celebrity chums, including David Jacobs and Wilfred Pickles, she set out to change people’s attitudes towards the disability and help children reach their full potential.

“There was no-one else raising funds to help at that time, so it was groundbreaking work.”

She added: “Although my mother was closely associated with other charities, not least those supporting veterans, the Dame Vera Lynn Children’s Charity always held a very special place in her heart – the children loved her as much as she loved them, and I’m extremely proud of what it has achieved and the difference it has made to so many families’ lives.”

Pilar Cloud, executive manager at the charity, said: “We have been extremely honoured to have had Dame Vera Lynn as our president and she was always a very passionate and wonderful ambassador for this charity.

“Moreover, she has always been hands-on, enjoying participating in sessions, singing songs with the children and setting the tone with real determination to ensure that ‘her families’ were never forgotten.

“She was very fondly regarded by all of the staff and families, and will be greatly missed by so many people.”

Dame Vera was recognised for her services to entertainment and charity in 2016 after being made a Member of the Order of Companions of Honour in the Queen’s Birthday Honours.

Anyone who wants to make a donation in Dame Vera’s memory can do so online at https://www.justgiving.com/campaign/keepsmilingthrough, by phone on 01444 473274, or by post.