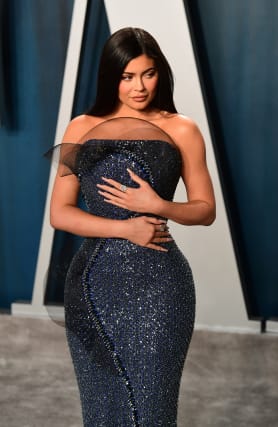 Kylie Jenner and her two-year-old daughter Stormi graced their first cover of Vogue together.

The pair appeared on the front of Vogue Czechoslovakia, featuring photographs taken on an iPhone over Zoom.

Jenner and Stormi posed at their sprawling property in Los Angeles for fashion photographers Luca and Alessandro Morelli.

Jenner shared the cover with her 181 million Instagram followers. It features a close-up of the mother and daughter lying next to each other and gazing into the camera.

Jenner also paid a sweet tribute to Stormi, her only child with the chart-topping rapper Travis Scott.

She said: “I love this little baby so much i want to burst.. sometimes i just look at her and cry knowing she will never be this small ever again.

“who knew something so little could take up most of your heart. God made no mistakes with you storm baby.”

Vogue also shared the cover, describing Jenner – who leveraged her huge social media following to grow her Kylie Cosmetics company into a billion-dollar business – as “the most powerful influencer on the planet”.

It said: “OnceUponATime, Princess #KylieJenner was born into the most-watched family in the world.

“She has become the most powerful #Influencer on the planet, Stormi’s mother, a #BeautyMogul and it seems that everything she wishes for comes true.”

Vogue Czechoslovakia launched in 2018 and covers the Czech and Slovak markets.