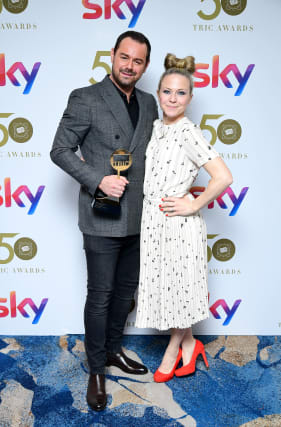 Danny Dyer has joked “it’s been hard to carry on the affair” with his on-screen wife while filming on EastEnders was suspended.

The actor, who plays pub landlord Mick Carter in the soap, has been reunited with Kellie Bright, who plays Linda Carter, for the first time since lockdown.

In  a clip from a forthcoming episode of behind-the-scenes spin-off show Secrets From The Square, Dyer joked about his “lockdown slickback” hairdo, while Bright told him: “You’ve grown some nice moobs.”

Asked by host Stacey Dooley how it felt to return to Walford, Bright said: “I felt a little bit emotional, I can sort of get my head around the distant working thing, but you just want to hug people.

She added: “I think it’s the first time in nearly seven years, apart from my maternity leave, that I haven’t seen Danny in all that time.”

Dyer replied: “Yeah, it’s been hard to carry on the affair.”

EastEnders: Secrets From The Square will air from the fictional restaurant, Walford East, to help plug the gap when the soap goes off air as episodes produced before the pandemic run out.

Filming is due to resume at the end of June.

The spin-off will premiere on Monday June 22 as Dyer and Bright discuss their time on the soap.

Each week, across five weeks, two cast members will appear on the show.

Finally, there will be a socially-distanced reunion between Diane Parish (Denise Fox) and Tameka Empson (Kim Fox).

The new instalments, to be filmed with social distancing, will be around 10 minutes shorter than the usual half-hour running time.

– EastEnders: Secrets From The Square will premiere on Monday June 22 and continue weekly on Monday nights at 8pm on BBC One.