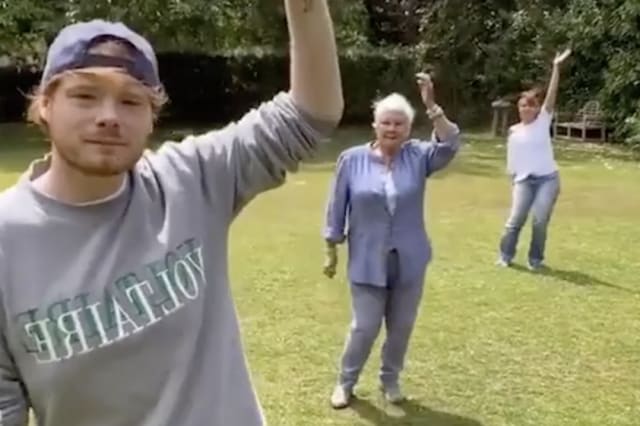 Dame Judi Dench has become a surprise star on TikTok - thanks to her grandson.

The Oscar-winning actor's grandson Sam Williams is an avid user of the social network and loves roping his gran in on video calls and even practising dances.

Watch the video above to see how Dame Judi has been passing the time during the pandemic.

Dame Judi Dench
File photo dated 22/05/17 of Dame Judi Dench holding an apricot rose named after her, as it is launched by Shropshire grower David Austin Roses during the press preview of the RHS Chelsea Flower Show at the Royal Hospital Chelsea, London. The PA news agency looks back at the highlights of the Chelsea Flower Show, as the RHS has taken the showpiece gardening event online in response to the coronavirus pandemic.
Dame Judi Dench unveils a mural of actress Dame Peggy Ashcroft by artist Helen Marshall, during the reopening of the Ashcroft Playhouse at the Fairfield Halls, Croydon. PA Photo. Picture date: Monday September 16, 2019. See PA story SHOWBIZ Dench. Photo credit should read: Dominic Lipinski/PA Wire
The Prince of Wales talks with Dame Judi Dench and her partner David Mills, watched by Celia Imrie at the annual Fortnum & Mason Food and Drink Awards at Fortnum & Mason, central London.
Dame Judi Dench with the Richard Harris Award for Outstanding Contribution by an actor to British Film, during the twenty-first British Independent Film Awards, held at Old Billingsgate, London.
Dame Judi Dench on stage during a gala concert at Buckingham Palace in London to mark the Prince of Wales' 70th birthday and recognise his commitment to the arts.
25-09-2018 Judi Dench attended 'Judi Dench - Donostia Award' Photocall during the 66th San Sebastian International Film Festival at Kursaal Palace in San Sebastian. (Photo by Thorton/PPE/Sipa USA)
Dame Judi Dench stands on a 'red carpet' of flowers before opening the RHS Garden Wisley Flower Show at the gardens near Woking in Surrey.
The Duchess of Cornwall enjoys an ice cream with Dame Judi Dench as she arrives at Queen Victoria's private beach, next to the monarch's holiday home in East Cowes on the Isle of Wight. Dame Judi, patron of the Friends of Osborne House, will show Camilla the newly restored Durbar Room, which was one of the locations for the film Victoria and Abdul in which she played Queen Victoria.
Up Next