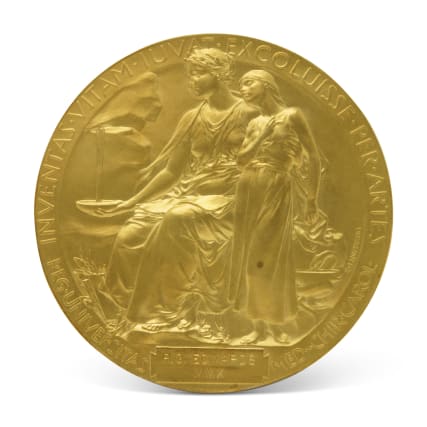 The Nobel Prize Medal awarded to the pioneer of IVF just three years before he died could fetch £800,000 at auction.

British scientist Sir Robert Edwards developed, with his colleagues, the procedure through which eight million babies have now been born.

He was presented with the 18-carat green gold medal in 2010 and it is now being sold at auction house Christie’s by his descendants.

They said: “Our father was delighted to be awarded the Nobel Prize recognising his team’s research work over many years, which by then had helped millions of couples throughout the world overcome the burden of infertility.”

The first IVF baby – Louise Brown – was born on July 25 1978 following a “20-year slog” to develop the procedure, amid criticism of the technique.

On Sir Robert’s death, aged 87, in 2013, Brown led the tributes, saying he had brought “happiness and joy” to millions.

Sir Robert realised as early as 1958 that fertilisation outside of the body might be used to help treat infertility.

But he and his collaborators, Patrick Steptoe and Jean Purdy, faced an uphill battle, with severe criticism from religious leaders, ethicists and the medical establishment as well as some of the public.

In 1974, he came close to giving up his work but was persuaded to continue by Purdy, as well as the letters he received from couples struggling to conceive.

Christie’s specialist Sophie Hopkins told the PA news agency: “This, for Robert Edwards, was a 20-year slog ending in what must have seemed an almost miraculous birth of Louise Brown…

“A huge number of things ranged against him, from Conservative public opinion to religious leaders who spoke out against the development of IVF.

“There was a relative lack of support from the British medical establishment”.

But Sir Robert had the “tenacity and determination to overcome all the difficulties, all the criticism”, and the medal is “testament to an amazing, very modest, but massively determined man”.

Private funding from a US heiress allowed the trio to continue their work.

After the birth of Brown, dubbed the first “test tube baby”, procedures followed in Australia and the US, and then around the world.

Edwards, Steptoe and Purdy later founded Bourn Hall Clinic in Cambridgeshire, where they continued to refine IVF technology and train specialists in the new field of medicine.

By 1987, 1,000 babies had been born following IVF treatment at the clinic, around half of all children born through IVF worldwide at the time.

Sir Robert was the sole recipient of the Nobel Prize in Physiology or Medicine, as his two collaborators has died when it was presented.

The auction record for a Nobel Prize Medal was smashed in 2014, with £4.8 million for James Watson’s medal for decoding DNA.

The medal will be offered in Christie’s upcoming Eureka! Scientific Breakthroughs Of The 20th Century online sale, running from June 24 to July 16.

Covid-19 symptoms may last beyond two weeks in young patients

Egypt Invites Elon Musk to Discover the Truth About the Pyramids

COVID-19 Symptoms May Last Beyond 2 Weeks in Young Patients