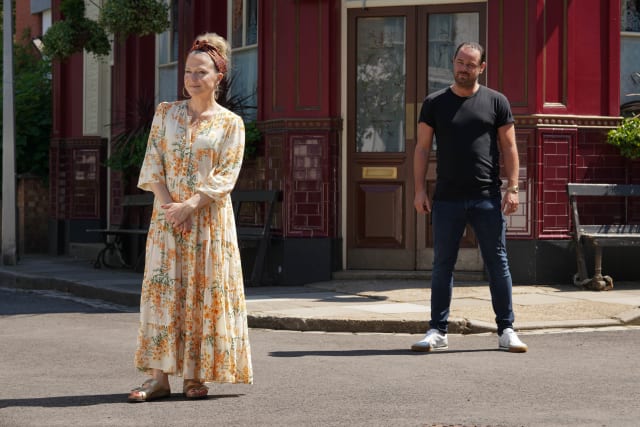 An EastEnders spin-off with Stacey Dooley as host will kick off with an episode featuring on-screen couple Danny Dyer and Kellie Bright.

EastEnders: Secrets From The Square will air from the fictional restaurant, Walford East, to help plug the gap when the soap goes off-air.

Episodes produced before the pandemic run out next week on BBC One, with filming due to resume at the end of June.

The spin-off will premiere on Monday June 22 as Dyer and Bright, who play Mick and Linda Carter, discuss their time on the soap.

Bright will reveal a wardrobe malfunction, Dyer will show of his “doof doof” face and Dooley will be teased about another famous investigative journalist.

Bright said the show would feature “things I don’t want people to know that I just blurted out”.

Each week across five weeks, two cast members will appear on the show.

Original cast members Letitia Dean and Adam Woodyatt will be followed by James Bye and Davood Ghadami, then Max Bowden and Tony Clay.

Finally, there will be a socially-distanced reunion between Diane Parish and Tameka Empson.

The new instalments, to be filmed with social distancing, will be around 10 minutes shorter than the usual running time.

EastEnders: Secrets From The Square will premiere on Monday June 22 and continue weekly on Monday nights at 8pm on BBC One.

'Devil Went Down to Georgia' singer Charlie Daniels dead at 83