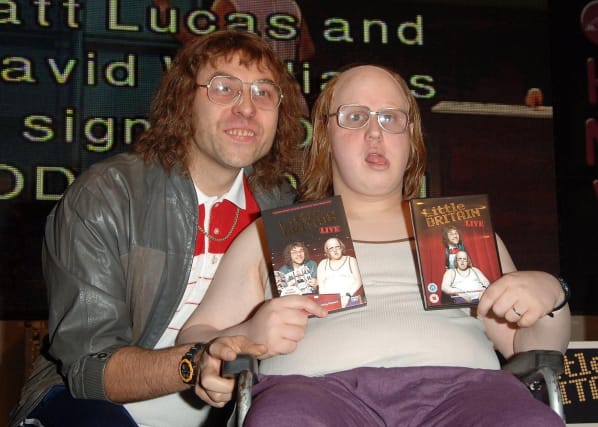 Matt Lucas and David Walliams have apologised for “playing characters of other races” in Little Britain.

The series has come under fire recently because of the use of blackface make-up in some sketches.

It was removed from Netflix, BBC iPlayer and BritBox in the wake of Black Lives Matter protests around the world following the death of George Floyd in the US.

Walliams said: “Matt & I have both spoken publicly in recent years of our regret that we played characters of other races.

“Once again we want to make it clear that it was wrong & we are very sorry.”

In the series, Walliams sported black make-up and a large afro wig to play the overweight black woman Desiree DeVere.

In the wake of recent Black Lives Matter protests, stars including Ant and Dec and Leigh Francis have apologised for portraying black people on TV.

Lucas previously said he has regrets about Little Britain, describing the comedy as “cruel”.

He told The Big Issue: “If I could go back and do Little Britain again, I wouldn’t make those jokes about transvestites. I wouldn’t play black characters.

“Basically, I wouldn’t make that show now. It would upset people. We made a more cruel kind of comedy than I’d do now.

“Society has moved on a lot since then and my own views have evolved. There was no bad intent there – the only thing you could accuse us of was greed. We just wanted to show off about what a diverse bunch of people we could play.

“Now I think it’s lazy for white people to get a laugh just by playing black characters. My aim is to entertain, I don’t have any other agenda.”

Earlier this year, the pair revisited Little Britain for BBC One’s Big Night In charity programme, reprising their roles as a number of the show’s famous characters including Lou and Andy, Daffyd, Marjorie Dawes and Sebastian while wearing makeshift costumes.