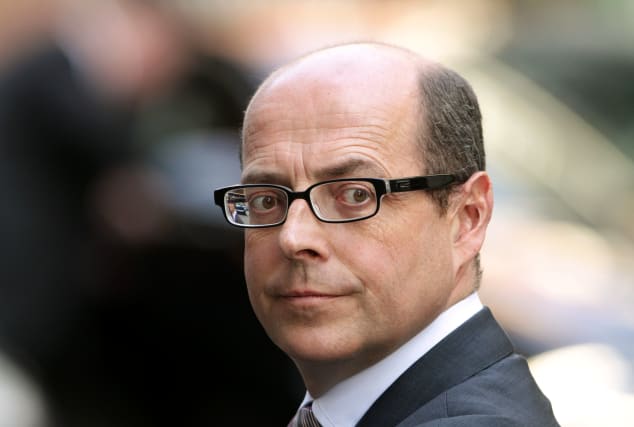 Nick Robinson has issued an apology after Harry Enfield used a racist term in an interview.

The presenter branded the comments "offensive" in a social media post he made after the discussion was broadcast on BBC Radio 4's Today programme, adding that he is "really sorry a racial slur was used on air".

On Thursday morning, Enfield defended the use of blackface in comedy, telling the programme that he thinks there should "still be a conversation about it".

He also used a racial slur when quoting the name of a 1930s comedy by GH Elliott and Al Jolson during the discussion.

After he used the word on air, Robinson said: "Just to be clear, Harry, there will be people offended by that term that you have just used.

"You are using it in inverted commas, let's not repeat it but it is a term that was used at the time."

Enfield also said that he has used blackface by darkening his skin to impersonate a person of colour "several times in the past".

"I have played Nelson Mandela in one thing for laughs and I did it because this thing had come round from the BBC that we couldn't do it any more," he said.

"So I thought 'Well, who is my hero? Nelson Mandela' – who I had the pleasure of meeting once."

He added that he then considered what the stereotype was for black people.

"Well, at the time there was a lot of things in the papers about drugs and stuff, so I made him a drug dealer or a pusher of alcopops to children and things like that, which I thought was so wrong that it was all right and, you know, I wouldn't do it now but I don't regret it," he said.

Enfield added that he feels "there should still be a conversation about it, really".

"Say if Rishi Sunak became prime minister, I would find it difficult that I would not be allowed to play him because of the colour of his skin."

The programme caused quite a stir on social media with many people unhappy with Enfield for using the word.

Awoke to hear Harry Enfield obliviously rambling about how he doesn't regret "blacking up" on @BBCr4today & using multiple racial slurs. Meanwhile the presenter repeatedly mispronounces his black guest's (very simple) name. Seriously? This is how you choose to cover these issues?

If you missed it and want to listen (yes it's even worse than it sounds), from around 8.44:https://t.co/kr2M7mzxM8

'You portrayed Mandela as a drug dealer, why didn't you portray Thatcher as a hooker?'

And Harry Enfield is left bleeding on the floor. #r4today

. @BBCr4today - I'd like to formally complain about Harry Enfield's language on the today programme in the segment when he didnt apologise for doing blackface (why is 'is racism okay?' suddenly up for debate). You cant broadcast that language to millions BBC.

He was criticised by fellow comedian Ava Vidal during the radio discussion.

She said: "I'm sure you can take the mickey out of the prime minister without blacking up."

She added that the use of blackface is "punching down and picking on oppressed people".

The comedian's comments came after TV presenters Ant and Dec apologised on Wednesday for using blackface during a segment on Saturday Night Takeaway.

Comedy series Little Britain has also been removed from BBC iPlayer after coming under fire over the use of blackface in some of its sketches.

Netflix has also pulled The Mighty Boosh and League Of Gentleman from the service over their use of blackface.

Black Lives Matter protests have taken place around the world following the death of unarmed black man George Floyd in the US after a police officer knelt on his neck, prompting greater scrutiny over the use of blackface in the media.

Does wearing a mask pose any health risks?

'Die Hard' is the most rewatched movie of all time, study says

Bernie Ecclestone's a dad again at 89