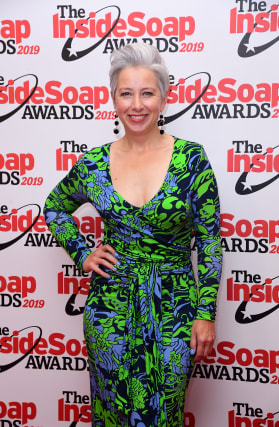 Filming a lockdown episode of Doctors from home without the physical presence of any crew was “daunting”, according to Sarah Moyle, who stars in the soap.

The actress added that she “jumped” at the “exciting” opportunity to learn about roles associated with production such as lighting and filming.

A 45-minute special episode of the BBC One soap is set to show the lives of characters at home during lockdown.

She told the PA news agency: “It was quite daunting, just suddenly having to think about doing everybody else’s job as well as the showing off bit.

“It was exciting as well, when I heard that’s what they wanted to do I absolutely jumped at it because I have no idea if I can film scenes by myself.”

Moyle, who plays Valerie Pitman in the soap, added: “We are so used to holding up a phone and videoing things, but actually having to think about lighting and background and what not, so it was a bit stressful but ultimately rewarding.”

She added that she is glad that the medical drama was able to return to television screens “to acknowledge how important these people are and I think the script does it really nicely”.

Mike Hobson, the programme’s executive producer, said that he is “really proud” of the cast and crew for producing the programme under the current circumstances.

He added that he hopes the programme strikes the right balance between making serious points about the virus outbreak and finding humour, saying: “I think doctors over the last 20 years has that great comedy element.

“We have some characters who bring that joy and that light relief to situations across the series and I think we definitely wanted that within this episode.

“There’s certainly some very funny moments and I think we did just try to think what our characters would be like at this time.”

The lockdown episode, titled Can You Hear Me?, will air on Friday at 1.45pm on BBC One.