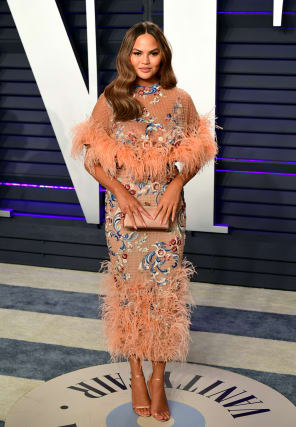 Chrissy Teigen has had her breast implants removed – and revealed a hilarious letter from her four-year-old daughter.

The TV presenter, 34, told fans last month she was undergoing the procedure, saying her implants had “been great to me for many years but I’m just over it”.

Teigen said she was looking forward to being able to “lay on my belly with pure comfort”.

She confirmed on Thursday the removal surgery had been a success, saying she was “so so so sore” but waking up to a letter from daughter Luna had eased the pain.

Teigen shared a picture of the note, which was handwritten and said: “Have fun pulling your boobies out.”

On the back of the paper Luna, Teigen’s oldest child with singer husband John Legend, wrote: “Bye boobies.”

Teigen first discussed having her implants removed in March. Speaking to Glamour magazine, she revealed she had the original procedure done when she was a 20-year-old swimsuit model but her priorities had changed after having two children.

Teigen, who married Legend, 41, in 2013, said her initial surgery kept the same cup size but made her breasts “rounder and firmer”.