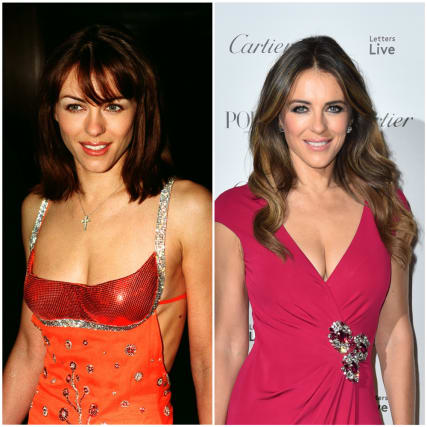 A Versace dress held together with gold safety pins has become one of her most famous fashion moments.

Actress and model Liz Hurley, who turns 55 on June 10, wore the designer dress while accompanying then-boyfriend Hugh Grant to the Four Weddings And A Funeral premiere in 1994.

As she celebrates the birthday milestone, we look at her career and highlights through the years.

Hurley also recently recycled another Versace dress she wore 21 years ago, and posted a photograph of her wearing it on her Instagram account.

She launched her own range of swimwear and beachwear in 2005, and often models it herself.

Her son Damian, whose father is American businessman Steve Bing, recently turned 18 and is following in his mother’s modelling footsteps.

Hurley’s acting career has included her playing  the role of Queen Helena, the scheming matriarch of a hedonistic fictional British royal family, in the E! series The Royals.

Her film roles include appearing in two Austin Powers films, as well as a leading role in the 2000 US comedy, Bedazzled.

Cosmetics giant Estee Lauder is often credited with having given Hurley her break into the modelling world in her late 20s, and she has since had a long-standing relationship working with them.

Some lucky passengers took a fake flight to nowhere

Mystery of why hundreds of elephants dropped dead

Look at the road!

Ed Sheeran and Paul McCartney among 1,500 acts calling for UK government to save live music