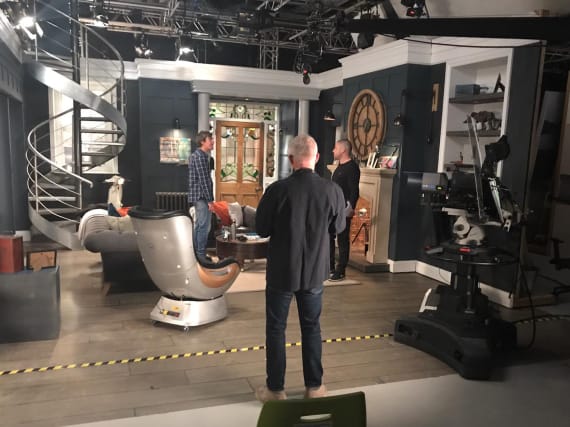 Emmerdale actors Jeff Hordley and Danny Miller follow social-distancing measures in images from the set of the ITV soap.

Photos from the Emmerdale set in Leeds show the pair, who play Cain and Aaron Dingle respectively, filming with a reduced number of crew.

One member of the crew is seen wearing a protective mask, while hazard tape divides the set to ensure actors and crew remain separated.

At least two cameras are visible in the images, and appear to be at least two metres apart.

Cain and Aaron Dingle feature in one of the various story lines from a special series about life in lockdown, all filmed in line with social-distancing measures.

Filming was halted in March because of Covid-19, but the cast and crew returned to work last month.

Hollyoaks, Coronation Street and EastEnders have all announced a return to filming in recent weeks, as lockdown measures are eased.