Goldie Hawn: I cry three times a day because of the pandemic 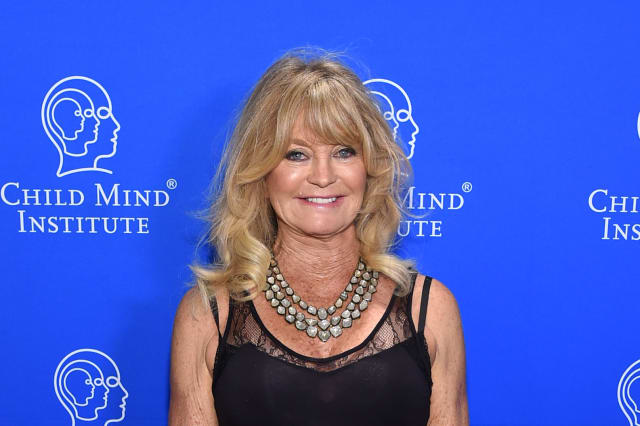 Goldie Hawn has said she cries several times a day because of the pandemic.

The 74-year-old actress feels "lucky" about her own situation, having a spacious Hollywood home.

"The people that I'm worried and concerned about are the people who are incarcerated or feel that they are in their apartments – it's not a house, there's no garden they can go out to," she told Good Morning Britain.

Goldie Hawn
Actresses Kate Hudson (L) and her mother Goldie Hawn share a laugh prior to a press conference at the Women In Film Crystal Awards, June 9, in Los Angeles. Hudson and Hawn were hosts for the ceremonies, which honor outstanding women who have helped to expand the role of women within the entertainment industry.
Actresses Susan Sarandon and Goldie Hawn (R), stars of the new comedy film "The Banger Sisters," pose together at the film's premiere September 19, 2002 in Los Angeles. The film is about a pair of rock 'n' roll groupies who reunite after twenty years opens September 20 in the United States. REUTERS/Fred Prouser FSP
Actresses Sally Field (L) and Goldie Hawn arrive for the opening night of the Mel Brooks musical, "The Producers," May 29, 2003 in Hollywood. The Los Angeles engagement of the hit musical stars Martin Short and Jason Alexander. REUTERS/Fred Prouser FSP/HB
Actor Robert Deniro poses with actresses Goldie Hawn (L) and her daughter Kate Hudson while arriving for the premiere of "Raising Helen" at the 2004 Tribeca Film Festival in New York May 1, 2004. REUTERS/Shannon Stapleton SS
U.S. Actors Kurt Russel and Goldie Hawn arrive for the 'Goldene Kamera' awards given by a popular German TV-magazine in Berlin February 9, 2005. The 55th annual Berlin Film Festival will start on February 10, where international films will compete for the 11-day event's top award, the "Berlin Bear." REUTERS/Tobias Schwarz TOB/acm
U.S. actress Goldie Hawn signs copies of her memoir, "A Lotus Grows in the Mud", at the Barnes and Noble store at the Grove shopping mall in Los Angeles May 11, 2005. REUTERS/Michael Buckner MB/TZ
Actress Diane Keaton (L) holds up her award as she and actress Goldie Hawn pose for photographers backstage at the 9th annual Hollywood Film Festival Hollywood Awards gala in Beverly Hills October 24, 2005. Keaton won the lifetime achievement award at the festival which honors excellence in all aspects of filmmaking. REUTERS/Fred Prouser
U.S. actress Goldie Hawn arrives before the world premiere screening of "Indiana Jones and the Kingdom of the Crystal Skull" by U.S. director Steven Spielberg at the 61st Cannes Film Festival May 18, 2008. REUTERS/Eric Gaillard (FRANCE)
U.S. actors Goldie Hawn and Kurt Russell (R) walk on the red carpet during the opening ceremony of the Cairo International Film Festival November 18, 2008. REUTERS/Asmaa Waguih (EGYPT)
Actors Goldie Hawn and Kurt Russell arrive at the 86th Academy Awards in Hollywood, California March 2, 2014. REUTERS/Lucas Jackson (UNITED STATES TAGS: ENTERTAINMENT) (OSCARS-ARRIVALS)
Actress Goldie Hawn and her partner Kurt Russell arrive at the 74th Annual Golden Globe Awards in Beverly Hills, California, U.S., January 8, 2017. REUTERS/Mike Blake
Cast member Goldie Hawn and actor Kurt Russell pose at the premiere of the movie "Snatched" in Los Angeles, California, U.S., May 10, 2017. REUTERS/Mario Anzuoni
24th Screen Actors Guild Awards – Show – Los Angeles, California, U.S., 21/01/2018 – Actresses Goldie Hawn and Kate Hudson (R) present an award. REUTERS/Mario Anzuoni
Cast members Goldie Hawn (L) and Amy Schumer pose at the premiere of the movie "Snatched" in Los Angeles, California, U.S., May 10, 2017. REUTERS/Mario Anzuoni
Up Next

"I cry probably three times a day because it hurts me to think there is abuse going on and anger going on.

"And it all has to do with confinement, fear, uncertainty ... it's catastrophising."

She said families being together means this is "an extraordinary time" which "we will not get again".

The Oscar-winning star is asking people to film themselves or their families laughing and post it on social media to help deal with anxiety.

"Laughter is very, very good for your body and fantastic for your brain," she said. "I believe that we are born with a seed of joy."

And she said of her long, successful relationship with Kurt Russell: "One has to really forgive because we're never going to do the right thing all the time."

'Spice Up Your Life' with these facts about birthday girl Mel B!

Pamela Anderson would 'absolutely' love to get married again

It was 'apocalyptic': Robbie Williams reveals his coronavirus anxiety struggle