Monty Don: There is a Nigel-shaped hole in our lives 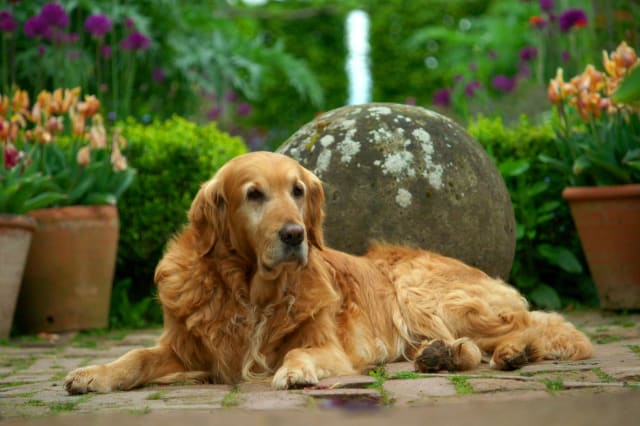 Monty Don has said his family has "a great big Nigel-shaped hole" in their lives after the death of their golden retriever.

His pet became the surprise star of BBC Two's Gardeners' World, receiving his own fan mail, social media fan accounts and lent his name to Don's book Nigel: My Family And Other Dogs.

Earlier this week the presenter revealed Nigel had died after he was taken ill and is now buried with "lots of tennis balls".

Don told the BBC Radio 4 Today programme that Nigel had been more than a companion and had helped him with his struggles with depression.

He said: "I think if you suffer from any kind of mental illness, whether be it depression or anxiety or whatever, having someone to look after, who returns that attention with completely unqualified love, is very powerful, it's powerful medicine.

Across the country Gardeners' World presenters give advice and share their knowledge from their own gardens to enable people to get the most out of theirs.

Currently hosted by Monty Don, the long-standing program was first introduced in the '90s and came back almost 10 years later in 2007, acquiring a legion of loyal green-fingered followers over the years.

Whether you want to know how to create depth in a small, backyard garden or make the most of your latest spinach crop with homemade pesto, presenters prove that the possibilities are endless for any gardener and garden.

Monty Don's cottage garden was first used as a vegetable patch, but, over the years, the gardener has transformed it into a traditional space filled with soft colours, fruit trees and over 50 kinds of old-fashioned shrub roses.

"There's just the basics – if you have a dog you have to take it for a walk, which means you have to go outside, you have to put your boots on and put a coat on and as anybody listening knows, when you are depressed, you don't do any of that.

"At the moment there is sort of a simmering level of anxiety and people are being very brave and they're resourceful and extraordinary but at the same time everybody is scared and anxious and pets, and in my case dogs, leaven that, they hold it steady, they tie you to a better reality.

"I think for all of us that happens and I think for millions of people who watch Gardeners' World, clearly Nigel was part of that."

Don added: "He was a member of our family and there's a great big Nigel-shaped hole in our lives.

"But he was 12, he had a lovely life. His death was shocking for us but it was quick and his last day we went for a walk and he ate and he was just super.

"It was just a lovely day and I think we were blessed. I've had lots of dogs and I hope I have more but that one relationship lightened our lives and we were lucky, we were really, really lucky."

Don also said that Nigel was unrivalled in his star power on the set of Gardeners' World, where he was frequently seen playing with tennis balls.

He said: "He was a bear of slightly limited brain, what he had was this absolute sense of purity. He exuded a kind of unsullied innocence and we all love our dogs, everybody thinks their dog is special, I've had lots of dogs and there was something special about Nigel.

"He would come out with me in the morning at half past seven and just stay with me all day, and wait for his call and then just steal the scene, every time, every single time."

'Every morning without fail': Gwyneth Paltrow drinks a 'superpowder' for her youthful looks