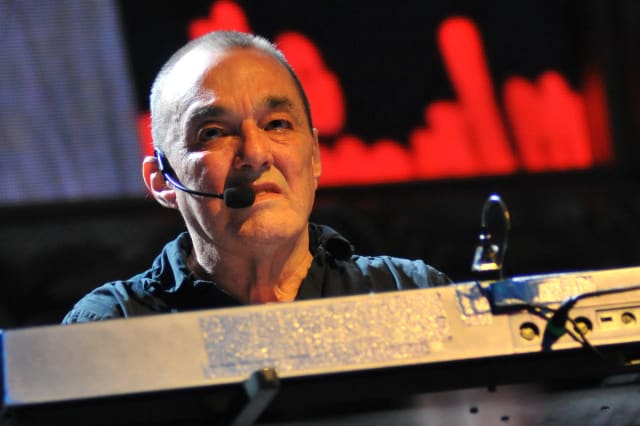 The Stranglers' keyboard player Dave Greenfield has died at the age of 71 after testing positive for coronavirus.

Greenfield, originally from Brighton, died on the evening of May 3, and contracted the virus following a prolonged stay in hospital for heart problems.

A long-standing member of the influential punk outfit, Greenfield was known for his distinctive sound and playing style, using instruments such as the harpsichord and Hammond electric organ.

Famous faces lost to coronavirus
LONDON, ENGLAND - NOVEMBER 26: Dave Greenfield of The Stranglers performs live at The O2 Arena on November 26, 2015 in London, England. (Photo by Burak Cingi/Redferns)
File photo dated 11/03/2003 of Tim Brooke-Taylor, arriving at the 2003 Television & Radio Industries Club (TRIC) Awards at the Grovesnor House Hotel, central London, the comedian and actor has died after contracting coronavirus, his agent said.
File photo dated 09/03/04 of comedian Eddie Large at the Bob Monkhouse BAFTA Tribute at BBC Television Centre in West London. Eddie Large, best known as part of the double act Little and Large, with Syd Little, has died aged 78.
File photo dated 17/8/2015 of American country/folk singer-songwriter John Prine who has died aged 73 due to complications from the coronavirus. He is pictured participating in the Creative Minds Event, hosted by US Ambassador to Ireland Kevin O'Malley at his residence in Dublin.
FILE - This Sept. 14, 2019 file photo shows Adam Schlesinger, winner of the awards for outstanding original music and lyrics for "Crazy Ex Girlfriend," in the press room at the Creative Arts Emmy Awards in Los Angeles. Schlesinger, an Emmy and Grammy winning musician and songwriter known for his band Fountains of Wayne and his songwriting on the TV show “Crazy Ex-Girlfriend,” has died from coronavirus at age 51. (Photo by Richard Shotwell/Invision/AP, File)
CORRECTS MAYOR'S LAST NAME TO CANTRELL INSTEAD OF CAMPBELL - FILE - This April 28, 2019, file photo, shows Ellis Marsalis during the New Orleans Jazz & Heritage Festival in New Orleans. New Orleans Mayor LaToya Cantrell announced Wednesday, April 1, 2020, that Marsalis has died. He was 85. (AP Photo/Sophia Germer, File)
Up Next

He penned the piece of music that would become Golden Brown, their biggest hit, eventually winning the band an Ivor Novello award.

However, his bandmates initially discarded the song and did not consider it a potential single.

He said: "On the evening of Sunday May 3rd, my great friend and longstanding colleague of 45 years, the musical genius that was Dave Greenfield, passed away as one of the victims of the Great Pandemic of 2020.

"All of us in the worldwide Stranglers' family grieve and send our sincerest condolences to Pam."

Drummer Jet Black added: "We have just lost a dear friend and music genius, and so has the whole world.

"Dave was a complete natural in music. Together, we toured the globe endlessly and it was clear he was adored by millions. A huge talent, a great loss, he is dearly missed."

Current vocalist and guitarist Baz Warne said: "We lost a true innovator, musical legend, and one of my dearest friends today.

"The word genius is bandied around far too easily in this day and age, but Dave Greenfield certainly was one.

"We stood together on the same side of the stage for 20 years, laughed, joked and shared our lives in the way that only band mates can. I'll miss him forever.

"Our thoughts and hearts are with his wife Pam, and to the millions of fans who worshipped at his altar, he'll never be equalled."

The band's manager Sil Willcox said: "We are all in shock, Dave was a kind, generous soul who had time for anyone and everyone and it has been my privilege to have known him as both a close friend and his manager for over 40 years.

"Our thoughts are with his wife Pam at this sad time."

The Stranglers, formed in 1974 in Guildford, recently postponed their farewell tour from this summer due to the Covid-19 pandemic.

Greenfield played on well-loved tracks including Golden Brown, Peaches and No More Heroes.

Critics compared his sound to that of Ray Manzarek from the Doors, who also used "rapid arpeggios" to create dynamism in his music.

Greenfield is survived by his wife Pam.

A lockdown shopaholic turns delivery boxes into cars for her cat