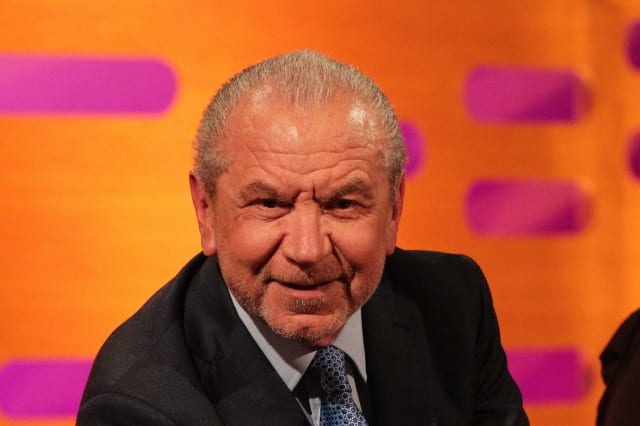 Lord Sugar has been criticised for sharing a coronavirus conspiracy theory on social media.

The Apprentice star tweeted a claim purported to be from a Japanese scientist saying that Covid-19 was man-made.

A statement on their website said: "Various posts on Facebook claim that the Nobel Prize-winning scientist Professor Tasuku Honjo has said that coronavirus is 'not natural'.

"The claim was also shared on Twitter, including by Lord Sugar.

"We've been asked to check this by lots of readers.

"This claim is false."

Lord Sugar later tweeted to say that he believed his earlier tweet to be "fake news", but defended his decision to share it.

When Lord Sugar was asked by one Twitter user what the source of the information in his original tweet was, he replied "who knows?"

In a separate post addressing someone who had told him to "concentrate on removing fake news from your feed", he said: "Shut your face."

Earlier this week, Professor Honjo released a statement via Kyoto University about him being used to spread unfounded conspiracy theories.

It said: "In the wake of the pain, economic loss, and unprecedented global suffering caused by the Covid-19 pandemic, I am greatly saddened that my name and that of Kyoto University have been used to spread false accusations and misinformation."

On Wednesday, Digital, Culture, Media and Sport minister Baroness Barran urged celebrities not to "fan the flames" around coronavirus by spreading misinformation.

She also stated the need for people to follow public health guidance as members of the House of Lords warned of a rise in "fake news".

On Monday, Conservative MP Julian Knight, who chairs the Digital, Culture, Media and Sport Committee suggested that Twitter should remove the verified "blue tick" status for accounts that shared misinformation about the pandemic.

He told the Commons: "Some of the most pernicious pieces of disinformation – such as 5G and, let's be frank, the lie about the Government's fake NHS accounts – have been amplified by blue tick verified users on Twitter."

A lockdown shopaholic turns delivery boxes into cars for her cat