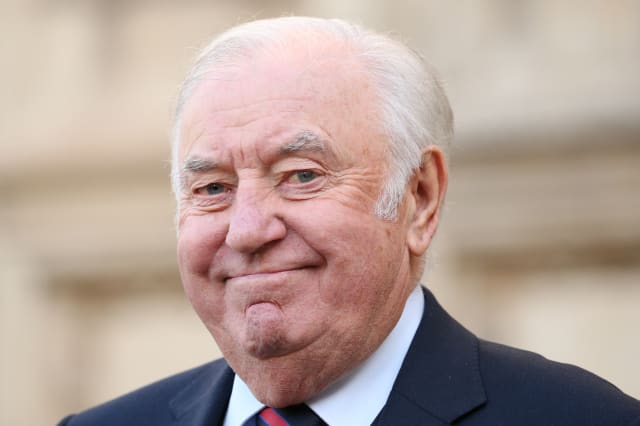 Jimmy Tarbuck has been diagnosed with prostate cancer.

The veteran comedian, 80, said during an appearance on ITV's Good Morning Britain that he is going to "try and beat it".

He said men can be too "shy" to get tested as he urged viewers: "All men out there watching, and all wives, get your husbands to go for the tests. I think after 50, just have a test, let them have a look at you.

"You will be relieved and be with your families for extra years."

He added: "I feel great. I'm on the telly and I'm having a good time.

Jimmy Tarbuck
File photo dated 11/12/19 of Jimmy Tarbuck, who has been diagnosed with prostate cancer.
File photo dated 04/10/88 of a group of children from three special schools meeting the then Prime Minister Margaret Thatcher and comedians Jimmy Tarbuck and Kenny Lynch (centre) at a Variety Club reception at 12 Downing Street. Music star and entertainer Kenny Lynch has died at the age of 81.
Jimmy Tarbuck arrives for a service of thanksgiving for the life and work of Sir Donald Gosling at Westminster Abbey in London.
(left to right) Des OÕConnor, Jimmy Tarbuck, Lord Andrew Lloyd Webber, Tommy Steele and Sir Cliff Richard push the button for the curtain to drop and reveal the Wall of Fame, a new art installation at the London Palladium in London.
The Duchess of Sussex meets Jimmy Tarbuck on stage at the Royal Variety Performance at the London Palladium in central London.
(seated left to right) Sir Cliff Richard, Tommy Steele, Des OÕConnor and Jimmy Tarbuck, as they wait to reveal the Wall of Fame, a new art installation at the London Palladium in London.
Jimmy Tarbuck (centre) after the funeral service of Sir Ken Dodd at Liverpool Anglican Cathedral.
Jimmy Tarbuck speaking during the Service of Thanksgiving for the Life and Work of the Ronnie Corbett at Westminster Abbey, London, who died last year at.
Jimmy Tarbuck and wife Pauline in Westminster Abbey, London ahead of Service of Thanksgiving for the Life and Work of the Ronnie Corbett who died last year.
Jimmy Tarbuck and Rob Brydon arrive for the funeral service of Ronnie Corbett, at St John the Evangelist Church, near the late comedian's home in Shirley, Croydon, south London.
Jimmy Tarbuck arrives for the funeral of Cilla Black at St Mary's Church in Woolton, Liverpool.
Former Liverpool player Ian St John (l) with Jimmy Tarbuck in the stands at Anfield
Comedian Jimmy Tarbuck and wife Pauline arrive at Ascot during Day Two of the 2011 Royal Ascot Meeting.
Sir Terry Wogan (left) leaves with Jimmy Tarbuck (right) and his wife from Corpus Christi Catholic Church in Tonbridge, Kent, following the funeral service for boxer Sir Henry Cooper.
Jimmy Tarbuck (left) and Ian Rush (right) in the stands
Jimmy Tarbuck arrives at Sir David Frost's Summer Garden Party, in Carlyle Square, west London.
Jimmy Tarbuck with his daughter Liza (right) at the Womans own Children of Courage award at Westminister Abbey.
Russell Brand, Michael Ball dressed as Edna Turnblad from the musical Hairspray and Jimmy Tarbuck after the Royal Variety Performance at the Empire Theatre, Liverpool.
Jimmy Tarbuck and wife attending David Frost's summer party in central London. Picture date: Wednesday July 5, 2006. Photo credit should read: Ian West/PA.
THE COUNTESS OF WESSEX AND JIMMY TARBUCK AT CHARITY EVENT IN SURREY.
Bruce Forsyth, Jimmy Tarbuck and Kenny Lynch share a joke while attending the 007 James Bond Celebrity Golf Classic and Gala Dinner celebrating 40 years since Dr.No and to raise money for the Ian Fleming Foundation and the Variety Club of Great Britain at Stoke Poges Golf Club. *... Buckinghamshire.
American singer/actress Jennifer Lopez and British comedian Jimmy Tarbuck backstage at the Dominion Theatre in London, after this year's Royal Variety Performance.
Native Merseysiders Cilla Black and Jimmy Tarbuck share a joke during the inaugural International Scouse Day, at the Sugar Reef Restaurant in London. *International Scouse Day, celebrates the achievements of Liverpudlians, and is expected to raise thousands of pounds for the Alder Hey Rocking Horse Appeal.
Comedian Jimmy Tarbuck with his copy of the freedom of the 'City of London' scroll, after an official ceremony held at the Guildhall.
Comedians Tom O'Connor (left) and Jimmy Tarbuck at the Hilton Hotel on Park Lane in London for the 1998 Comic Heritage Comedy Awards this evening (Sunday). Photo by Paul Treacy/PA
Comedian Jimmy Tarbuck arriving at the 'Football Football' resturant in London's Haymarket, for the soccer legend George Best's 50'th birthday celebration.
COMEDIAN JIMMY TARBUCK AT BUCKINGHAM PALACE AFTER RECEIVING THE OBE FROM THE PRINCE OF WALES. WPA ROTA.
COMEDIAN LESLIE CROWTHER - WHO WAS BADLY INJURED IN A CAR ACCIDENT LAST YEAR - IS JOINED BY FELLOW COMICS FRANK CARSON [LEFT] AND JIMMY TARBUCK BACKSTAGE AT LONDON'S DOMINION THEATRE AFTER HE MADE AN EMOTIONAL COMEBACK TO THE STAGE AT ROYAL VARIETY PERFORMANCE.
Europe's number one golfer Seve Ballesteros warms up with his partner, entertainer Jimmy Tarbuck, during practice ahead of the tournament at St Pierre Golf Club, Chepstow.
The comedian Jimmy Tarbuck with his famous number plate 'comic' which he is putting on his new Mercedes-Benz.
Comedian Jimmy Tarbuck poses with Susan Lee from Nottingham and New Zealander Kerry Gallagher, who have been chosen to join him on the new series of his TV show Winner Takes All.
(l-r) Comedians Jimmy Tarbuck, Des O'Connor, Ernie Wise and Bruce Forsyth at the London Palladium when they paid tribute in a show to Ernie's partner, Eric morecambe, who died earlier this year.
Comedian Jimmy Tarbuck at the Variety Club of Great Britain awards lunch at the Hilton Hotel, London, when he was named Showbusiness Personality of 1985. He is alongside Ian St John (l) and Jimmy Greaves, the soccer pundits who were given special awards for their 'Outstanding achievement' to television.
Entertainer Tommy Steele holds his godson James Thomas, the six-month-old son of comedian Jimmy Tarbuck (left), following his christening at St Anne's Church in Kingston Hill, Surrey.
Liverpudlian comedian Jimmy Tarbuck, who is to star in the 'Jack and the Beanstalk' pantomime with Ivor Emmanuel and Arthur Askey.
Up Next

Tarbuck said Sir Tom Jones has been his "mentor", and had advised him to see a doctor when he told him about his symptoms.

"(Sir Tom) told me what was going to happen, all the tests," Tarbuck said.

"He said I've had this done and he told me 'You'll get bloods shown'."

He added: "Boys, go. It is embarrassing. The fella said to me 'We're going to give you the thumbs up'. I said 'I hope not'. He roared laughing."

Tarbuck, who said the cancer has not spread, added: "I'm having injections and taking tablets and then I take a yearly cycle."

The entertainer revealed earlier this month that he was going to be tested for the disease the day after his 80th birthday with a biopsy.

He told the Mirror: "The thought of having prostate cancer is scary but I am determined to face it head on – and that's because of learning that Rod Stewart has gone through it too."

Tarbuck, who rose to fame in the 1960s and was known for hosting variety shows including Sunday Night At The London Palladium and Live From Her Majesty's, also talked about going on tour again at the age of 80.

He told the programme: "I love the work, I hate the travelling, but I'm doing two cities that I love – Norwich and Wolverhampton.

"The people are very nice, they come out to see me there, so I enjoy that."