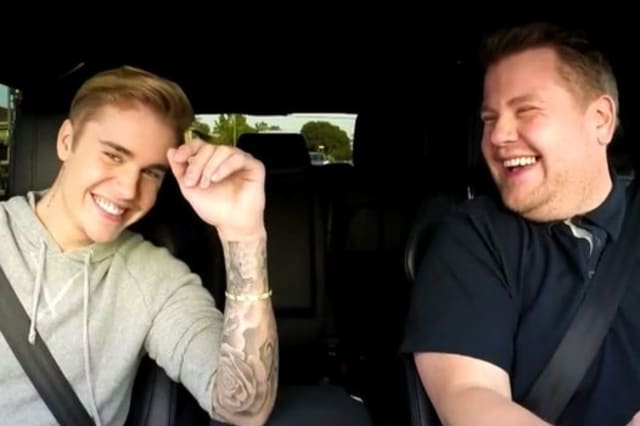 James Corden fans have shared their shock after discovering that the host doesn't drive on popular US show The Late Late Show's Carpool Karaoke segment.

A Twitter user shared a video of the presenter alongside Justin Bieber as the car was towed along the street in Los Angeles by another vehicle with a camera mounted on the front.

"Saw James Corden and Justin Bieber filming carpool karaoke and this is why I have trust issues — he isn't even driving!" the user, @ZoliHonig, wrote.

Saw James corden and Justin Bieber filming carpool karaoke and this is why I have trust issues — he isn't even driving! pic.twitter.com/bkP9moGJmu

They went on to joke: "Next thing you know they gonna tell us that his friends don't *actually* need a ride."

Many couldn't believe what they were seeing and were quick to make the joke that it would perhaps be more apt if it were called "car-pull karaoke".

Although, others said they had seen Corden driving around filming without being pulled along.

Y'all when I saw One Direction filming Carpool Karaoke James was actually driving 👀 pic.twitter.com/e8rIEYLgE3

Plus, former guest Jane Krakowski claimed when she took part in a special Broadway edition of the show in New York Corden was actually in control of the wheel, so the evidence isn't entirely conclusive.

Corden and Bieber were busy on Wednesday being filmed serving up cheese and fish tacos from the "Yummy Food Truck" with proceeds going to an LA food bank, reports TMZ.