We don’t give up, says Victoria Derbyshire after BBC axes programme 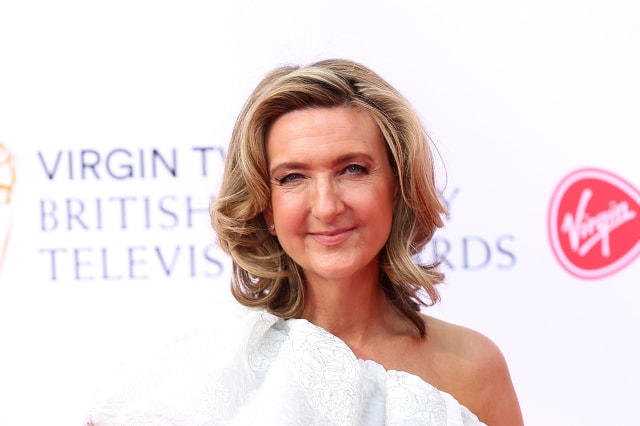 Victoria Derbyshire said "We don't give up" after it was announced that her TV programme is being taken off air.

The presenter's daily BBC Two current affairs show is being pulled from the schedule as a result of cuts at the corporation.

Derbyshire opened Thursday's episode by telling viewers: "We are still here, telling your stories and covering the issues that are important to you in your life.

Victoria Derbyshire at the start of her show this morning:

"We are still here, telling your stories and covering the issues that are important to you in your life.

"And you know what? We don't give up." @vicderbyshirepic.twitter.com/QJPI9dvjOD

The BBC's media editor, Amol Rajan, announced the news on Wednesday, tweeting that the programme was ending because the cost of making it was "deemed too high".

He said: "The Victoria Derbyshire Show is coming off air. I understand @BBCNews is committed to Victoria + the (award-winning) journalism of the show.

"Cost of doing it on linear channel when savings are needed deemed too high. BBC declined to comment ahead of an announcement next week."

Victoria Derbyshire's show began in 2015 and broadcasts live on BBC Two and the BBC News channel every weekday from 10am.

The programme won a Bafta in 2017 and has been nominated for several awards, including RTS Presenter of the Year.

Following the news of it being axed, the show's former editor, Louisa Compton, was among those reacting to the BBC's decision.

2/ The show won awards at the RTS and from BAFTA. Victoria nominated for Best Presenter 4 years in a row - and won once. Digital impact was huge. Show was designed to reach audiences the BBC struggles to connect with, and it did - online

She described the cancellation as "madness", saying: "An organisation that values original journalism and under-served audiences should not be doing this."

She added that the programme "consistently breaks huge stories, has won countless awards including a Bafta, and has broken new ground".

Journalist Emma Ailes, who works on the programme, said it was "devastating news", and Anna Collinson, who also works on the show, said: "It's gutting this could mean the end of a young, talented, diverse team who are led by strong, female editors and a fantastic female presenter.

"It's gutting for our viewers. The BBC is constantly criticised for failing under-served audiences – the same audiences we were proud to serve and served well. I have already heard from interviewees who are devastated by this news.

An organisation that values original journalism and underserved audiences should not be doing this.
It's madness.#VictoriaLIVE consistently breaks huge stories, has won countless awards including a BAFTA and has broken new ground.
Plus it has an outstanding team and presenter. https://t.co/N3vkLpYBzg

"We are a scrappy, feisty and passionate bunch and always did our absolute best to hold those in power to account.

"Whatever happens now, I will forever be proud of working for this award-winning programme and will never forget everything it taught me."

Shadow culture secretary Tracy Brabin said she would be "looking into why (the show) is being taken off air", while Conservative MP Damian Collins, who is bidding to be re-elected as chairman of the Digital, Culture, Media and Sport Select Committee, said the reports were "disturbing".

"There needs to be a proper review of BBC finances as well as asking licence fee-payers what they value and want to see more of," he said.