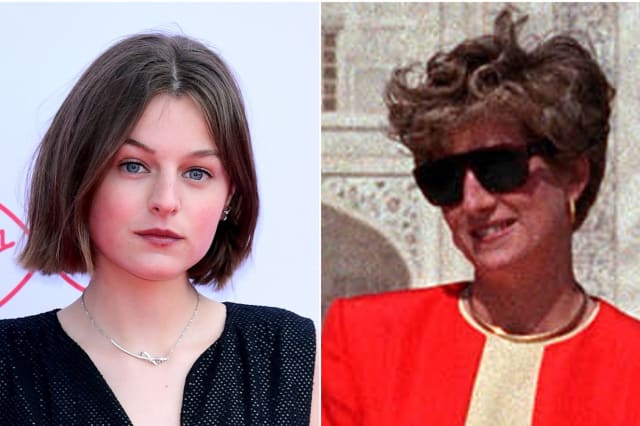 Emma Corrin has been transformed into Diana, Princess of Wales to shoot the new series of The Crown

The actress plays the late royal in the fourth series of the Netflix drama, which is currently in production at Elstree Studios and locations across the UK.

She is wrapped in a gown to avoid the rain, but a sliver of a demure blue dress and her nude heels can be seen.

It is thought Winchester Cathedral is standing in for St Paul's, where the Prince of Wales and Diana were married.

Other pictures show Helena Bonham Carter, who plays Princess Margaret, with her hair under a net.

The third series of The Crown launched in November and saw Olivia Colman take over the role of the Queen from Claire Foy, while Bonham Carter replaced Vanessa Kirby and Tobias Menzies took over the part of the Duke Of Edinburgh from Matt Smith.

The third series followed events including the Aberfan mining disaster, the moon landing and the investiture of Charles as Prince of Wales.

Why Gigi Hadid SNAPPED on Jake Paul Over Zayn Malik