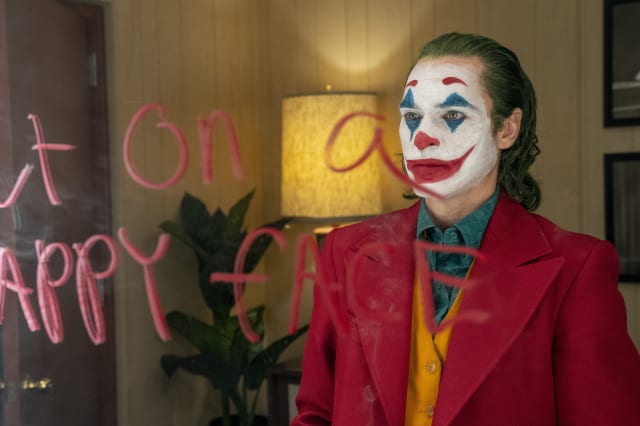 Bafta bosses have said it is "disappointing" and "infuriating" that this year's film awards feature all-white acting nominees and that no female directors are recognised.

Joker leads the nominations at the British Academy film awards with 11 nods.

The origin story of the comic book villain, starring Joaquin Phoenix as Arthur Fleck, is in the running for best film, best actor, best adapted screenplay and best director.

It is closely followed by Martin Scorsese's gangster epic The Irishman and Quentin Tarantino's ninth film, Once Upon A Time... In Hollywood, which both scored 10 nominations and will also compete in the best film category, alongside Sir Sam Mendes' war film 1917 and Korean film Parasite.

Phoenix will compete with Once Upon A Time star Leonardo DiCaprio, Marriage Story's Adam Driver, Rocketman star Taron Egerton, and Jonathan Pryce for The Two Popes in the leading actor category.

The nominees for the leading actress Bafta are Jessie Buckley for Wild Rose, Scarlett Johansson for Marriage Story, Saoirse Ronan for Little Women, Charlize Theron for Bombshell, and Renee Zellweger for Judy, while Margot Robbie scored two nominations in the supporting actress category for her roles in Bombshell and Once Upon A Time... In Hollywood.

The other nominees are Laura Dern for Marriage Story, Scarlett Johansson for Jojo Rabbit, and Florence Pugh for Little Women.

The supporting actor nominees are Tom Hanks for A Beautiful Day In The Neighborhood, Sir Anthony Hopkins for The Two Popes, Al Pacino for The Irishman, Joe Pesci for The Irishman, and Brad Pitt for Once Upon A Time... In Hollywood.

It had been hoped that Greta Gerwig would land a directing nomination for her adaptation of Little Women, but she is only recognised in the adapted screenplay category, leaving an all-male directing line-up of Mendes for 1917, Todd Phillips for Joker, Scorsese for The Irishman, Tarantino for Once Upon A Time, and Bong Joon-ho for Parasite.

Addressing the lack of diversity, Bafta chief executive Amanda Berry told the PA news agency: "Being totally honest, we are disappointed and that is not to take anything away from the people who have been nominated."

She added: "We do have 13 directors nominated who are females across other categories, so everybody from Jennifer Lee who directed Frozen 2, and this is what gives me joy and hope actually, six female directors in the shorts category and that is the category where we are really seeing talent at the start of their career and they are the industry of the future, but we are going to do more, we are not going to stop pushing."

Marc Samuelson, chairman of Bafta's film committee, said: "Clearly everybody knows that everybody in the four acting groups of nominees are white, it's infuriating, we can't make the industry do something, all we can do is encourage and push and inspire and try to help people coming in at the bottom end.

"There are some good signs – if you take all the nominations, it's up to about 36% female and it's been rising every year and that is pretty much doubled over the last couple of years so that is a really good sign and that is across all categories, which is very interesting, because obviously a lot of those are craft, which is also very important.

"Keep going on that and maybe in another couple of years we are over 40% and are heading towards parity, which would be great.

"It doesn't take anything away from the issue in the acting categories but nonetheless it's something and things are moving."

He added that the Bafta programme Elevate, which focuses on under-represented groups, will once again focus on female directors to try to address the issue.

Berry said she had been encouraged by the diversity of the EE rising star award nominees, which was announced on Monday and includes Awkwafina, Jack Lowden, Kaitlyn Dever, Kelvin Harrison Jr and Micheal Ward.

She said: "That group was a much more diverse group of actors and again that is talent at the start of its career so we are seeing these changes coming through.

"We just need to get the studios to greenlight more projects covering diverse subjects directed by women, but it's happening; it's just not happening fast enough, so we are going to push really hard.

This year's Bafta ceremony will be hosted by Graham Norton at the Royal Opera House on February 2.