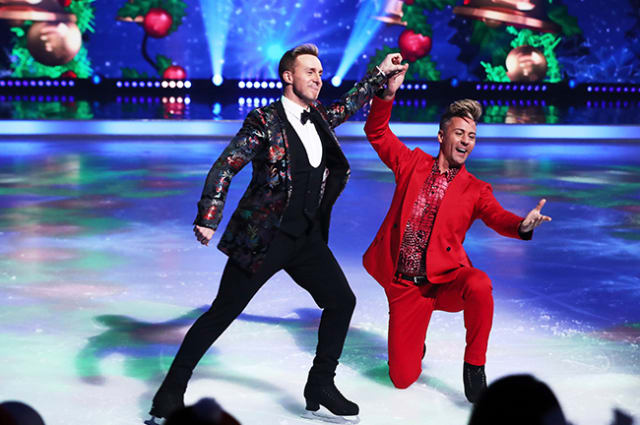 Ian "H" Watkins broke down in tears as he made history by skating on Dancing On Ice as part of the first same-sex pairing on prime-time TV.

The Steps star, 43, took to the rink with his professional skating partner Matt Evers for a dramatic routine to High Hopes by Panic! At The Disco.

Their performance prompted raucous cheers from the studio audience and scored a total of 25 points out of a possible 40 from the judges.

Following the routine, Watkins, who is gay, sobbed as he explained why dancing with a man had meant so much to him.

Asked how he felt following the routine, he said: "Emotional because I have wanted this for so long and it means so much to so many people. And the world is ready for this."

John Barrowman, who was making his debut on the judging panel, also broke down in tears, saying it was because they "represent someone who is like me".

The routine follows years of speculation that same-sex couples would feature on a TV dance competition and comes after BBC One's Strictly Come Dancing featured a same-sex dance between two of its professionals in the last series.

Torvill told Watkins: "I loved the routine. I loved the joy on both your faces. There is so much more to come from both of you."

Their performance took in a solo spiral and a strongman counter-balance lift.

Great British Bake Off winner Candice Brown was among those celebrating the moment.

She said on Twitter: "Wowwwwww I am in tears my darling @TheMattEvers I am so so proud of you both @Ianhwatkins Thank you @dancingonice for this NORMAL."

Goddard ended up in next week's skate-off after becoming the first contestant to fall in this series.

Leave it to our Ice Panel to make an entrance! 🚁 Welcome back @torvillanddean and @AshleyBanjo, and a big warm sparkly #DancingOnIce welcome to @JohnBarrowman! pic.twitter.com/hQs5JSufiz

The chat show host skated to Give It Up by KC and The Sunshine Band but took a tumble at the start of her routine. Afterwards she said: "I'm OK. I'm really angry with myself."

Willoughby also introduced former Blue Peter presenter Radzi Chinyanganya, who stepped in at the last minute when Michael Barrymore was forced to pull out of the show due to injury, describing him as the show's "super sub".

He said: "This is like my GCSEs at school. I haven't left enough time to revise. But I'm going to give it the beans."