Gavin and Stacey Christmas special ends on a huge cliffhanger 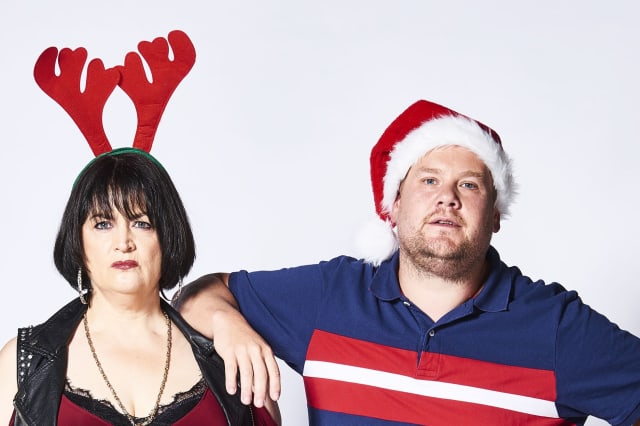 Gavin and Stacey's Christmas special ended on a cliffhanger after the episode finished with a marriage proposal between two major characters left unanswered.

Fans had waited almost a decade for the beloved sitcom to make a comeback and were treated to an hour-long festive episode.

The special picked up 10 years after the previous instalment and revealed Gavin and Stacey (Mathew Horne and Joanna Page) now have three children while Smithy and Nessa (James Corden and Ruth Jones) were successfully co-parenting their son, Neil.

Gavin and his parents – played by Alison Steadman and Larry Lamb – travelled to the town of Barry in Wales to be with Stacey and her family, including mother Gwen (Melanie Walters) and eccentric uncle Bryn (Rob Brydon).

Smithy also introduced his new girlfriend, Sonia, to the group but viewers were left stunned when Nessa told him she loved him and got down on one knee.

"I loves you.. with all my heart. So, will you marry me?" #GavinandStaceypic.twitter.com/1E2Nx1ETo7

But before Smithy could answer, the credits rolled and viewers were left in the dark as to what happened next.

Jones left the door open to another episode but said it is difficult for her and co-creator Corden to get together.

She told The Sun: "It is so complicated for me and James to get together to write.

"I do say never say never, as while we did make it work that was after three years of trying to find time when we could sit down and write it.

"Obviously with the way it ends, there is room for more.

"It's a shame we didn't have more time when we were writing so we could have written more, then have it all ready to go.

"But it was such a challenge to get that special filmed."

Elsewhere in the festive special, Gavin and Stacey shared a heartwarming moment at the spot in Barry where they first told each other "I love you".

The married couple have been stuck in a rut while raising their children.

However, Stacey handed Gavin a packet of matches she took from the hotel they spent their first night together in the first ever episode and told him "we've got to keep the fire burning".

And one of Gavin & Stacey's long-running jokes almost had a resolution.

Bryn and nephew Jason have struggled to keep the events of their mysterious fishing trip a secret and it looked as though viewers would finally learn the truth about what happened.

Bryn said "it was very dark, in every sense of the word" but before he could come clean Gavin and Stacey's children came bursting into the room, leaving the trip to remain a mystery.

The episode was dedicated to the late actress Margaret John, who played Gwen's next-door neighbour Doris. She died in 2011.

We had to be together to watch it go out tonight!Gavin and Stacey is a show about friendship and family. Tonight's show has been a labour of love from start to finish and we hope you enjoy it.Wherever you are and whatever you're doing.Happy Christmas from us both #GavinandStaceypic.twitter.com/kUKMiXUEyL

Before the episode aired, Corden tweeted a picture of him and Jones and revealed they were watching it together.

"Gavin and Stacey is a show about friendship and family," he said. "Tonight's show has been a labour of love from start to finish and we hope you enjoy it.

"Wherever you are and whatever you're doing. Happy Christmas from us both."