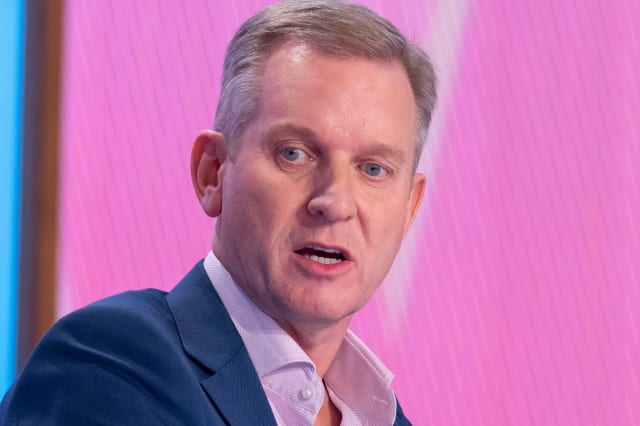 ITV has said "now is the right time" for The Jeremy Kyle Show to end as it announced it has been axed permanently following the death of a guest.

The confrontational talk show was suspended indefinitely by the broadcaster on Monday following the death of a participant, 63-year-old Steve Dymond, a week after a programme featuring him was filmed.

The programme has now ended for good following an outcry and calls for it to be cancelled from MPs and members of the public.

He got grilled about being a "good father".

"I called the police on my salad."

"I called the police on my salad."

Well, forgetting to bring a ring is a bad start.

Well, forgetting to bring a ring is a bad start.

LONDON — The world of daytime television in Britain is a strange and wonderful place.

From bizarre confrontations on The Jeremy Kyle Show to unexpected segments on This Morning, UK television is awash with odd moments during the sleepy period when most people are either at work or school.

Enter @daytimesnaps — a Twitter account made by Nick Walker that shares a steady stream of out-of-context screenshots from the shows that fill the hours between nine and five...

BONUS: 7 things you should not do at work

Jeremy was stunned by his guest's decision to pop the question:
Domestic violence victim Geoff appears on The Jeremy Kyle Show. Photo: ITV
ITV have confirmed that The Jeremy Kyle Show has been temporarily cancelled after a guest passed away after filming, with the show instead being replaced by Dickinson's Real Deal. ITV issued a statement about the sad news, writing: "Everyone at ITV and The Jeremy Kyle Show is shocked and saddened at the news of the death of a participant in the show a week after the recording of the episode they featured in and our thoughts are with their family and friends."The show has been cancelled indefinitelyThey continued: "ITV will not screen the episode in which they featured. Given the seriousness of this event, ITV has also decided to suspend both filming and broadcasting of The Jeremy Kyle Show with immediate effect in order to give it time to conduct a review of this episode of the show." The Jeremy Kyle Show has been on the air since 2005, and has aired over 3000 episodes. However, the show has not been without its controversies.A former guest on the show, Chris Lyons, previously opened up to The Guardian about his experiences, explaining: "It ruined my life. All of a sudden, I wasn't Chris Lyons any more. I was just that guy off the Jeremy Kyle show." Terry Carvell was another contestant on the show, and told the newspaper: "To tell you how bad it was: I haven't spoken to anybody in my family for about the last 15 years, but even my family members who saw the programme wrote letters complaining about how badly he'd treated me, and that half of what he said was untrue. We'd been recording for about 20 minutes or so and he said, 'Stand up, big man.' Well, I don't take crap from anybody. So I just looked at him. He got his microphone and he rammed it up under my chin. He was trying to provoke a reaction, and I just stood there. And he said, 'Just for one moment, you wanted to hit me, didn't you?'"
Up Next

ITV's chief executive Dame Carolyn McCall said in a statement: "Given the gravity of recent events we have decided to end production of The Jeremy Kyle Show.

"The Jeremy Kyle Show has had a loyal audience and has been made by a dedicated production team for 14 years, but now is the right time for the show to end.

"Everyone at ITV's thoughts and sympathies are with the family and friends of Steve Dymond."

The broadcaster said that it will continue to work with Kyle on other projects, but has not yet specified what those will be.

In an email to staff prior to the show's permanent cancellation, Dame Carolyn had said that halting filming and broadcasting of the show was "a very difficult decision to make but we felt that it would be inappropriate to continue to broadcast the show when a participant on it has so recently died".

She added that the decision was not "in any way a reflection on the show, but the best way we think we can protect the show and the production team from this reaction we expect to this death".

Kyle was pictured and filmed near his home in Windsor on Tuesday, but has yet to comment personally on the show's cancellation.

Mr Dymond's body was found at an address in Grafton Street, Portsmouth, on May 9.

Hampshire Police said the death is not being treated as suspicious and a file is being prepared for the coroner.

On Tuesday, Culture Secretary Jeremy Wright said it was a "deeply concerning case" as he called for broadcasters and production companies to have "appropriate levels of support in place".

Damian Collins, chairman of the Commons Digital, Culture, Media and Sport Committee (DCMS), said it will discuss "what should be done to review the duty of care support for people appearing in reality TV shows" in a private meeting being held on Wednesday.

Following Thalassitis' death, ITV said that its "duty of care is a continuous and ongoing process for each (Love) Islander".

The broadcaster added that a review had led it to "extend our support processes to offer therapy to all Islanders and not only those that reach out to us. And we will be delivering bespoke training to all future Islanders to include social media and financial management".

The broadcaster said it would also no longer be "reliant on the islanders asking us for support but for us to proactively check in with them on a regular basis".

The next series of Love Island will return to air in the next couple of weeks.