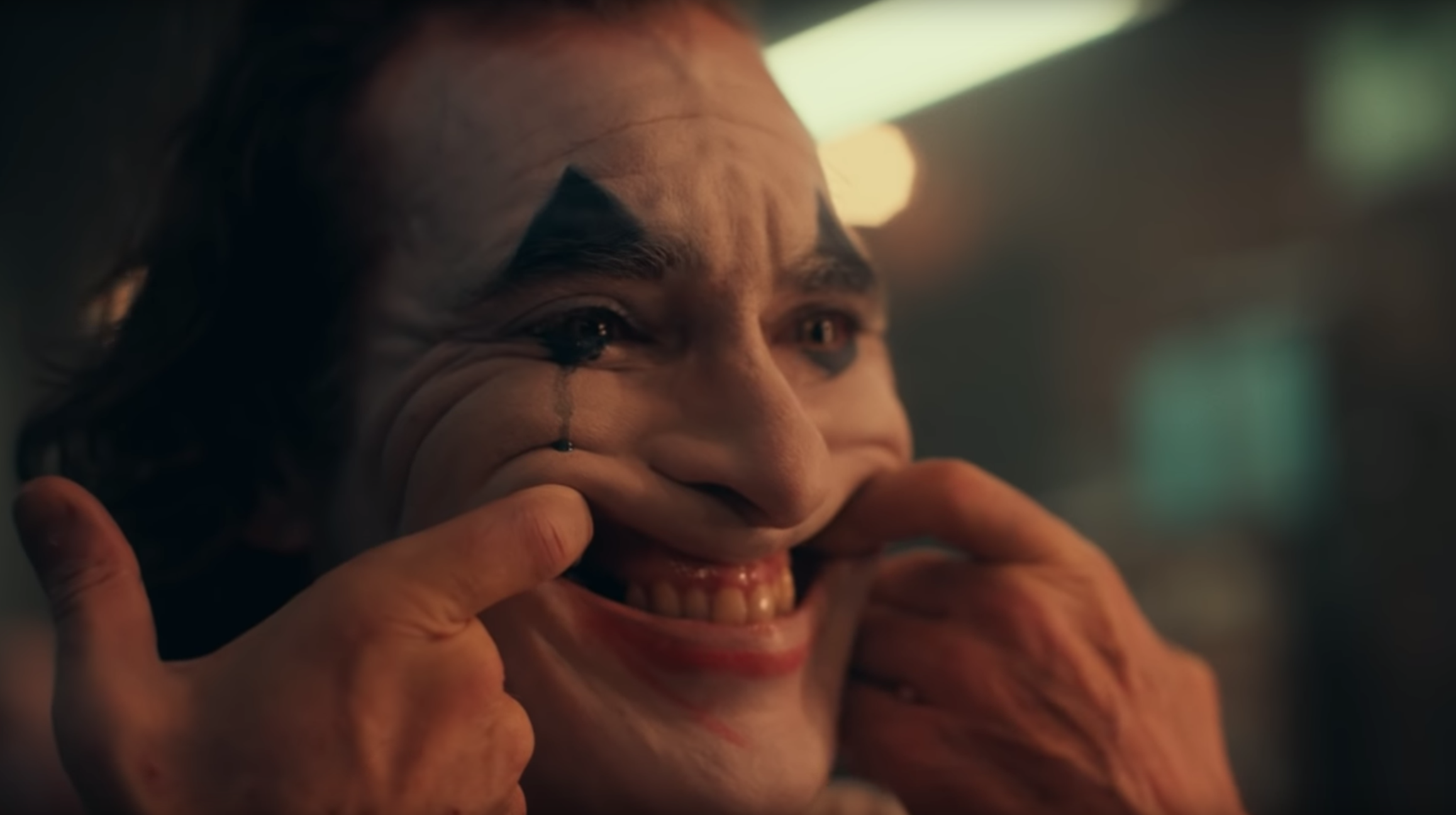 The first teaser trailer for Joker has dropped and the film is keeping its cards close to its chest.

Starring Joaquin Phoenix in the title role, the first footage from Todd Phillips' Batman spin-off offers up snippets from his life to establish how the villain came to be.

Opening in a psychiatrist's office, a doctor asks Arthur Fleck/Joker: "Does it help to have someone to talk to?" before the scene switches to our protagonist walking down a street and up some stairs.

"My mom used to tell me to smile and put on a happy face," he says. "I thought my purpose was to bring laughter and joy to the world."

Later, Arthur is seen putting on clown make-up, getting beaten up – twice – though he doesn't look at all fazed the second time. There's a scene of him in a doughnut shop with Zazie Beetz's character, another of him walking to Arkham hospital as well as talking to Bryan Tyree Henry's character behind some mesh.

"Gotham has lost its way," Thomas Wayne says on the TV in another scene. "What kind of character would do something so cold-blooded?"

Arthur can then be heard saying "I used to think my life is a tragedy, but it's a comedy," as well as performing on stage in front of a crown of Jokers before he is depicted in his full red suit walking down the street.

Robert De Niro's character looks like he's a talk show host and further adds to The King of Comedy references in Joker.

The suits Phoenix wears, both in the trailer and on the poster, are ridiculously similar to the ones De Niro's Rupert Pupkin wears in the 1982 movie and the plot about an aspiring comedian going mad is said to be what Phillips was going for with his own story.

In Martin Scorsese's film, Pupkin stalks and kidnaps a talk show host in order to force him to give him a slot to perform live on TV too so maybe Arthur will do the same.

Here is what people have to say about the first trailer:

Not mad at that Joker trailer at all pic.twitter.com/av7CU2TrM8

JOKER: It looks really good and like a proper fucking movie and I appreciate that it's allowed to be stylized and different.

Also, I don't know why it exists and I don't care about it and it looks really morose. But I hope it's good and everyone likes it. The end.

The comic origin of Joker getting his skin stained by falling into a vat of chemicals is kooky/fun, but there is something psychotic, unnerving & downright creepy about a man smearing clown makeup on his face & going insane. Phoenix seems to be going the Heath route. #JokerMoviepic.twitter.com/OCrXAfBIRb

Marc Maron, who also appears in the new DC film, described it in an interview with NME:

"I think it's a very interesting approach to this world. I've been somewhat judgemental when it comes to comic book movies and I've got a little pushback in the press for being a hypocrite. Whatever I think, if you get a call and someone says, 'Hey do you wanna do a scene with Robert De Niro and Joaquin Phoenix?' your principles fall to the wayside. If it's relative to what I think of Marvel movies then it's like, 'Yeah, of course I'm gonna do that'. Oddly, it's not that kind of movie. The approach that Todd Phillips has taken is more of an origin story and a character study of a mentally ill person that becomes The Joker. It's more of an intimate and gritty movie with a very specific scope. It's going to be really interesting to see how it comes out."

Joker centres around the iconic arch nemesis and is an original, standalone story not seen before on the big screen. Phillips' exploration of Arthur Fleck (Phoenix), a man disregarded by society, is not only a gritty character study, but also a broader cautionary tale.

Joker is expected for release in cinemas from 4 October.

READ MORE: First footage of It: Chapter Two is terrifying