Miley Cyrus and Liam Hemsworth are married after nine years of dating off and on, the Disney Channel alum seemingly confirmed on Boxing Day.

Cyrus, 26, posted several black-and-white pictures of herself and and Hemsworth, 28, hugging on Instagram, as well as a selfie of them kissing. The former Hannah Montana star wore what appears to be a floor-length white dress, while the actor donned a tuxedo, as they stood in front of a fireplace adorned with flowers.

The couple first sparked wedding speculation on Monday, December 24, after surfer Conrad Carr posted Instagram Stories footage of the couple cutting a cake at their Nashville home. In the clip, the singer is wearing a light-colored off-the-shoulder dress, while the Hunger Games star is dressed in a black tuxedo with a boutonniere. Tish Cyrus, Miley's mother, is also pictured, looking on with adoration.

In another video Carr posted, Hemsworth takes shots alongside brothers Luke and Chris Hemsworth, with "Mr. & Mrs." balloons visible in the background and partygoers cheering on.

Around the same time, Miley's sister Noah Cyrus shared an Instagram Stories photo of herself giving the camera a thumbs-up with tears in her eyes. 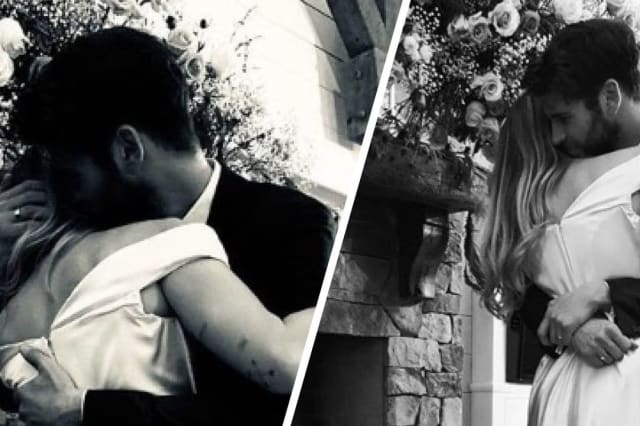 The bride and groom met in 2009 on the set of their romantic drama The Last Song and made their public debut as a couple the following year. "She makes me really happy", Liam told Details magazine in 2012. "When you start, you want to be professional, but when you're filming those scenes with someone [in The Last Song] and pretending to love them, you're not human if you don't feel something."

The Aussie actor proposed to Miley with a 3.5-carat Neil Lane ring in June 2012, after which the Hannah Montana alum said she felt like "all my dreams are coming true".

The couple split in September 2013 but reconciled by January 2016, when Miley was spotted wearing the ring again. That summer, Liam told GQ Australia the breakup was "actually a good decision" at the time. "We were both going in different directions, and it's just what needed to happen", explained. "We were both super young ... We both needed that."

Miley reflected on their split and reconciliation on SiriusXM in May 2017. "I think people that break up and get back together, that's awesome", she said. "You get time to be yourself. You get time to grow up. I think if you're growing up attached to another person, you never really get solid as your own being. So I'm really solid, and then he gets to be really solid. And together we get to be two really grounded people. It's not a half and a half making a whole."