The Two Ronnies' Fork Handles script is going under the hammer 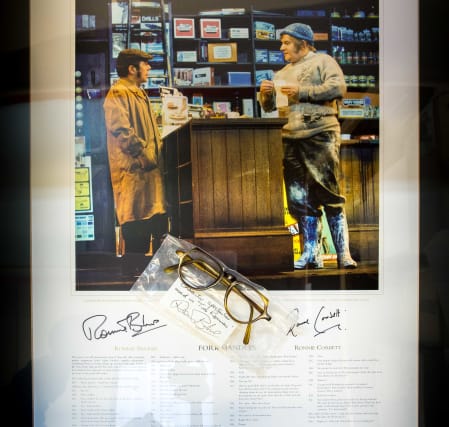 A rare slice of British comedy history is up for grabs with The Two Ronnies' original Fork Handles script due to go under the hammer.

Penned by Ronnie Barker, the single sheet - hand-written in red ink - is expected to fetch up to £40,000 at auction.

The famous sketch employs wordplay to comic effect when Barker's character goes into a hardware store, run by Ronnie Corbett, with a seemingly simple request for "fork handles", and ends up with four candles instead.

Also known as The Hardware Shop or Annie Finkhouse skit, the short performance frequently charts as one of the nation's best-loved comedy scenes.

Since first airing in September 1976, it has been immortalised by a pub named The Four Candles in Barker's home-town of Oxford.

At the late comedian's funeral, vergers held four candles rather than two.

The sketch was apparently inspired by a real event which took place in a shop in Broadstairs, Kent.

This script previously sold for £48,500 in 2007, after surfacing on an edition of the BBC's Antiques Roadshow the previous year.

It was authenticated by Corbett who surmised that Barker, who rarely wrote in red ink, may have penned it for a charity auction as he was sometimes uncomfortable with public appearances.

Consultant for Hansons Auctioneers and TV antiques expert Marc Allum said: "I saw the script in 2006 and filmed it for the Antiques Roadshow at Carters Steam Fair in north London.

"It was then subsequently shown to Ronnie Corbett who confirmed its authenticity.

"On the day when I filmed it, I was completely amazed.

"To hold Ronnie Barker's hand-written script for one of the most iconic comedy sketches in history was beyond words."

Jim Spencer, manuscripts expert at Hansons in Etwall, near Derby, said cataloguing the lot was "an honour".

The script will be sold along with other Two Ronnies lots on December 20.