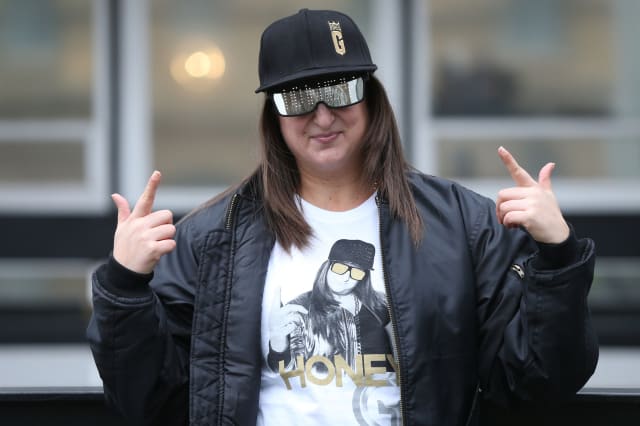 X Factor hopeful Honey G has ruled herself out of performing in the Eurovision Song Contest days before the release of her first single.

She described the idea as far from her "cup of tea" as she outlined her plans to focus on developing her career as a rapper - starting with her track The Honey G Show, available from Friday.

In an exclusive interview on Wednesday, the 35-year-old said: "I don't really think that's my cup of tea.

"I'm looking to launch my career as a rap music artist, as someone who has been heavily influenced by the hip-hop world, and I'm hoping to drop an album next year, do some headline tours and concerts around the globe.

"I'm looking in the direction of multi-platinum albums and Eurovision isn't really the route that I would go down. It's not me."

Her comments came as she launched a full line of merchandise in black, white and gold colours, including T-shirts, teddy bears, mugs, her signature baseball caps and masks of her face.

As well as providing "definite Christmas present material," she revealed how she hoped the products would inspire wearers to "fight" for their dreams.

"I want the merchandise to empower my fans to fight for what they think is right and what they believe in," she said.

"I think that is a strong and powerful message for Christmas, when some people get down in the dumps, and it's a time when we need to go out of our way to empower people and encourage them to follow their dreams and let them know that nothing is impossible.

"That's what it all means. Whether men, women, 'mini-Gs', whatever race they are, I want that message to be a strong part of what I am trying to achieve.

"I really want people to know that the sky is the absolute limit."

Since proceeding to the quarter-finals of the ITV song competition last month, Honey G, real name Anna Georgette Gilford, has faced heavy criticism from viewers accusing her of making a mockery of the show and the rap music genre.

But describing herself as a "resilient person", she responded: "When I see people making negative comments about me it is hurtful, but I kind of trained myself to not take any notice of it any more and if I see someone saying something horrible I just won't click on it.

"They are just spreading negative energy and I am all about positive vibes ... haters mean nothing to me."

After signing a record deal with show judge Simon Cowell's label, Syco, she said that her success following the show had made her the "happiest person alive".

Giving a rare insight into her life behind the signature Honey G cap and sunglasses, she said: "My sister asked me the other day what I wanted for Christmas and I struggled because my dreams have all just come true.

"So I asked her for a Melissa McCarthy DVD."

Honey G's merchandise is available to buy online from her website, honeyg.co.uk.