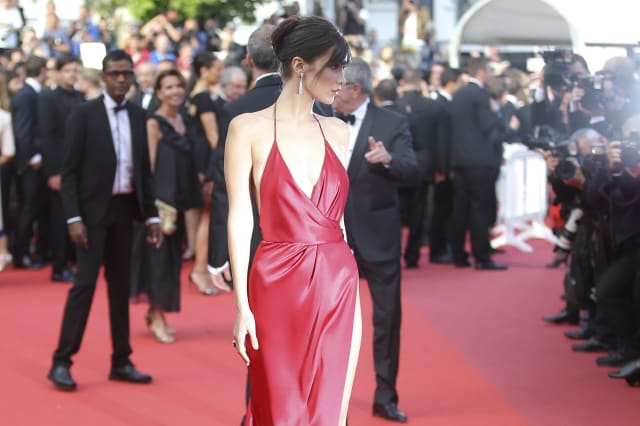 Bella Hadid made sure all eyes were on her at the Cannes Film Festival on Wednesday night as she hit the red carpet in a plunging scarlet Alexandre Vauthier silk wrap dress.

The striking gown was low-cut and slit to the very top of her thigh, leaving no room for underwear. Luckily for Bella, it wasn't a windy day.

The American fashion model, 19, was attending the premiere of the film La Fille Inconnue - or rather, Unknown Girl.

But eagle-eyed red carpet followers have spotted an uncanny resemblance: the gown looked very similar to one worn by Rita Ora two years ago at the MTV VMA Awards.

While Rita's dress was by Donna Karan and featured a train and long spaghetti straps, the two seem to have struck a similar red carpet look.

Bella, the sister of fellow model Gigi Hadid, was also showing off a newly cropped fringe - although it was the dress that certainly stole the show.