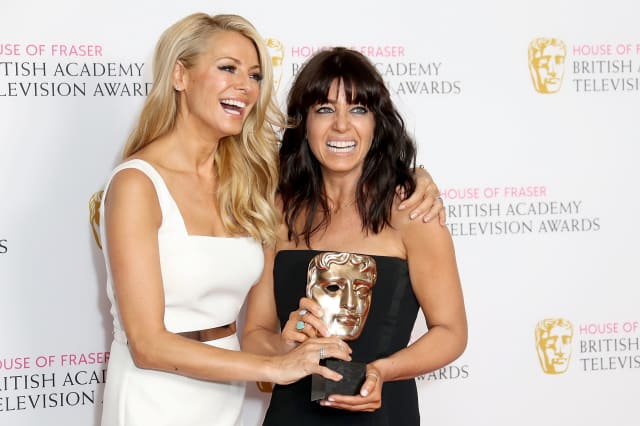 Strictly Come Dancing beat the likes of Britain's Got Talent and Adele At The BBC to take home its first ever TV Bafta.

The show's host Tess Daly said they were "genuinely shocked" as she took to the stage at the Bafta TV Awards to collect the entertainment programme gong.

"This is the most incredible honour, we have never won a Bafta before and it honestly means the world to all of us so thank you to everybody at Bafta," she said.

Joining her on stage, her co-host Claudia Winkleman joked that she "regretted the three tequilas" she had had, adding: "Huge thanks to the producers, the judges and our amazing dancers, we cannot believe it. We're going out for five days after this."

Tess said she was sure Adele At The BBC was going to win the category, so they were unprepared for the win.

Claudia said: "I can't believe it, for us but also for the production team, we didn't see it coming at all, we didn't think it was going to be us."

Asked if it was bittersweet to win a Bafta after former host Sir Bruce Forsyth had left the show, Tess said: "Brucie had a lifetime achievement award as he should, he's a legend, so I'm sure he would be thrilled for us."

The award for single documentary went to Channel 4´s My Son The Jihadi, while the current affairs award was won by BBC Two's Outbreak: The Truth About Ebola (This World).

Popular BBC One series Doctor Foster lost out in the mini-series category, which was won by Channel 4´s This Is England '90.

Director Shane Meadows said: "This was probably the end of This Is England and you kind of dream of how you are going to finish something and this was the dream you had, was to come to the Baftas, the last chance to win something for something you love."

Justin did a faux British accent, saying "Oh shut up" to screaming fans before presenting the award.

The duo are in London promoting their new film Trolls.

Presenter Jon Snow described the terror attacks as the most "testing evening he has ever known in news television".

"It was very emotional, it ripped the heart out of Paris," he said, adding that it had been "a struggle to get it to the screen".

He dedicated the award to one of the team's producers, Sarah, who could not attend the Baftas.

Idris Elba presented the award for best comedy performance by a female actress.

Taking to the stage he explained his hoarse voice, saying: "I've lost my voice so bear with me, I'm not drunk I promise."

Actress Michaela Coel won the tough category for her performance in Chewing Gum and said she wanted to "pay her respects to the late Victoria Wood" as she accepted her award.

The international award went to Transparent, the Amazon series that tells the story of an American family and their journey after they discover their father is transgender.

American actor Jeffrey Tambor, who plays the lead role, said it was an incredible honour to win the award for the series.

He said: "This is a series that answers the question that it's okay to change, you will still be loved. Go for your authentic self, be who you are, to hell with the consequences. Live, love, be free."

Comedian Peter Kay showed why he was named winner of the male performance in a comedy programme category for Peter Kay's Car Share.

The TV star took to the stage and opted not to give a speech, instead just resting on the podium looking shocked. After feigning shock at winning, he stood on stage silently, and then simply said "Cheers, thank you" as he exited the stage.