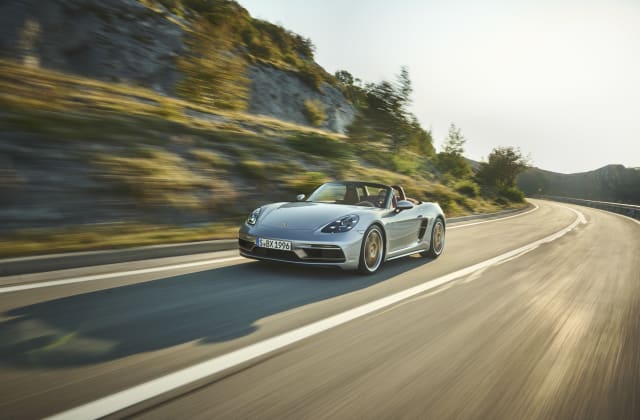 The Porsche Boxster has been on sale for a quarter of a century this year, and to celebrate the German firm has launched a limited edition model.

Called the Boxster 25 Years, it will be based on the GTS 4.0 model and be limited to just 1,250 units worldwide.

It takes design inspiration from the original Boxster concept car, which was first shown at the 1993 Detroit motor show. Key influences include a reinterpretation of the ‘Neodyme’ paint job, which is used on various parts such as the 20-inch alloy wheels and side air intakes.

Other nods to the concept include the use of the Bordeaux leather interior and red fabric roof, with the latter getting embossed ‘Boxster 25’ lettering.

Inside, there are electrically adjustable sports seats, Boxster 25 door sills, and a heated leather sports steering wheel while LED headlights feature on the outside.

Based on the GTS 4.0 model, the Boxster 25 Years gets a naturally aspirated 4.0-litre flat-six engine making 394bhp. A six-speed manual gearbox is fitted as standard with a seven-speed automatic available as an upgrade.

It has a top speed of 182mph and, when equipped with the automatic gearbox and Sport Chrono package, is capable of going from 0-60mph in under four seconds.

The 25 Years also gets Porsche Active Suspension Management, which lowers the ride height by 10mm, and a mechanical limited-slip differential.

The Porsche Boxster 25 Years is on sale now with prices starting at £72,760 with deliveries following later in the Spring.