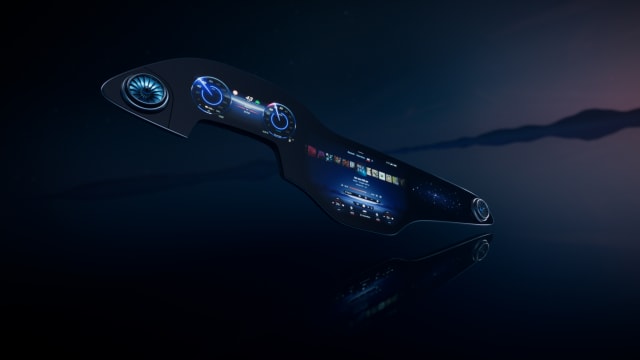 The new electric EQS saloon’s dashboard will feature a full-width screen, with displays for the driver and passenger as well as integrated artificial intelligence.

Called MBUX Hyperscreen, it is said to bring a ‘wow effect’ to the luxury car’s cabin.

The on-board artificial intelligence uses learning software to adapt the user experience to who’s on board and make personalised suggestions for various infotainment and in-car functions.

It also claims to be able to predict what menu a user wants next, reducing the need to trawl through different screens to change settings. An example that is given is if the driver always turns the heated steering and heated seats on during a weekday evening in winter, the car will ask if they would like to do so with one button when the car is turned on at this time.

The curved screen merges various screens together seamlessly so it’s not clear where one ends and the next begins. Meanwhile, analogue air vents are built into the design and integrated lighting gives the illusion that the unit is floating.

The front seat passenger also has their own screen, with up to seven passenger profiles available. If the driver is alone in the car, the screen reverts to a decorative design.

Mercedes says it has analysed usage data for its current MBUX system and has found that the vast majority of time is spent using the navigation, media and phone functions. As such, the navigation is always front and centre.

“We merge technology with design in a fascinating way that offers the customer unprecedented ease of use. We love simplicity, we have reached a new level of MBUX.”

The EQS saloon will be the flagship model in Mercedes’ new electric vehicle range, called EQ. It will eventually see an electric equivalent of many of its popular existing models joining the range, with the EQS being similar to the existing S-Class.

Car ownership will remain vital to Brits in post-Covid world