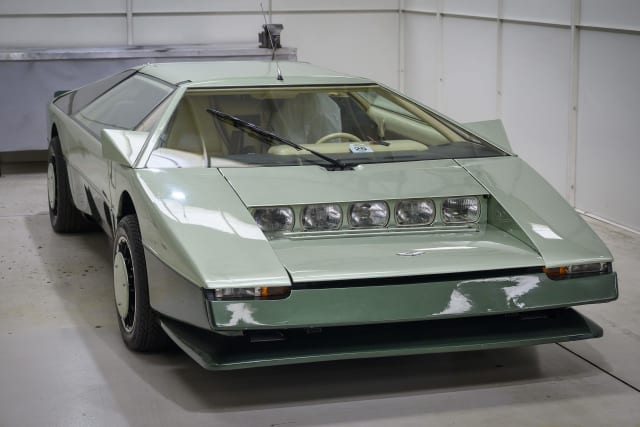 Aston Martin has announced plans to break the 200mph barrier in one of its classic concept cars.

Back in 1981, the Aston Martin Bulldog concept hit 191mph during testing at the MIRA proving ground, but development was called off before it had a chance to find the final 9mph that would have made it the fastest production car of its time.

Now, Darren Turner – one of the firm’s racing drivers – will get behind the wheel for one last go.

Last year, the concept was handed over to Classic Motor Cars in Bridgnorth, Shropshire, by its new owner to undergo a complete restoration.

Richard Gauntlett, who is overseeing the restoration, said: “The car is well on the way to being restored and CMC will have it running by the end of the year. We will then attempt the record that never was.

“A critical part of this was finding the right driver for the job and someone that could get involved in overseeing the final elements of the project, in terms of set up and testing.

“I am delighted that Darren Turner, who has been an Aston Martin works and high-performance development driver for more than 15 years, has agreed to join the team.”

Turner said: “I had heard of the legend of Bulldog from within Aston Martin and when news started to filter out about the car being restored to go for the 200mph target, I thought that was such a cool thing to do.

“I was following the story and thinking that it would be great to be involved in. When I was asked to drive it I didn’t need to be asked twice!”

“I really appreciate being asked and I’m looking forward to becoming part of the story of bringing Bulldog back to life and finally achieving what it set out to achieve all those years ago.”

The Bulldog had a fascinating wedge shape that was designed with aerodynamic efficiency in mind, helping it to achieve those incredible top speeds. Its engine was a 5.3-litre V8 with twin turbochargers, making 600bhp.