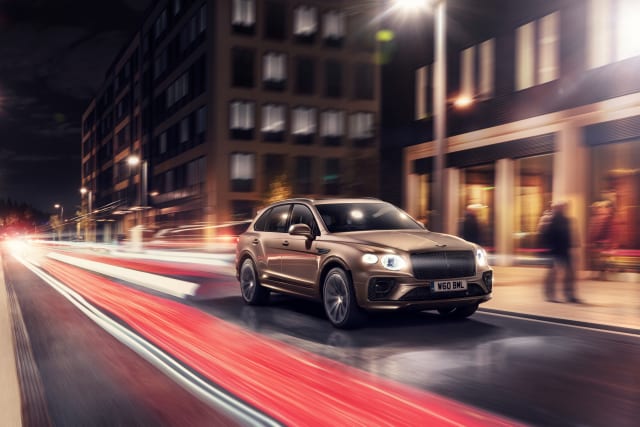 Bentley has showcased a new facelifted version of its Bentayga Hybrid SUV.

The updated Bentayga Hybrid arrives as the first in a pair of plug-in hybrid models released by Bentley this year, hitting the market prior to what is expected to be a hybrid version of the firm’s Flying Spur.

The Bentayga Hybrid is powered by a 3.0-litre twin-turbocharged V6 petrol engine which is linked to a 17.3kWh battery and an electric motor. In total, the setup produces 443bhp and 700Nm of torque and can return up to 31 miles of electric-only range.

In total, Bentley claims that the new Hybrid will deliver a combined range of 536 miles from a full tank of unleaded and a fully charged battery. Depending on the type of charger used, Bentley states that a 100 per cent charge can be achieved in as little as two and a half hours.

Different drive modes allow the owner to tailor the car’s settings to their specific needs and driving environment. EV Drive, for instance, locks the car in electric-only mode (when enough charge is available) while Hold Mode switches drive to the engine and holds on to the battery’s charge for use at a later time.

Inside, the new Bentayga Hybrid features a new 10.9-inch central display which incorporates both Apple CarPlay and Android Auto as standard. New USB-C ports have also been fitted alongside a wireless phone charger system, while an inbuilt SIM card allows the car to offer connectivity functions without the requirement for a phone to be connected to the system.

Looks-wise the new Bentayga Hybrid receives a larger grille which is framed by LED matrix headlights, while around the back newly designed lights help to give the car a sharper appearance than before.

Bentley’s Bentayga Hybrid is expected to arrive in dealerships this summer, with prices expected to exceed the £130,500 starting price of the previous model.