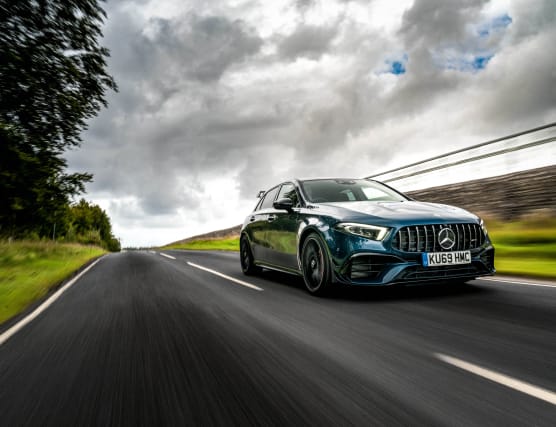 We’ve become blasé about these high-performance hot hatches, but even by modern standards the A45 is impressive.

In 2020 it’s easy to get complacent about performance cars. We’ve become so used to ludicrous power figures that we forget how quickly things have progressed. It’s actually starting to get a bit out of hand.

Take the Mercedes-AMG A 45 S. This is a hatchback with 415bhp and 500Nm of torque that pummels its power into the tarmac through an eight-speed automatic transmission and trick all-wheel-drive system. The result is a sub-four-second 0-60mph time.

Despite having been on sale since late last year – it hit dealer forecourts just after we shot Road Test of the Year 2019, making it eligible for competition this year – this is my first time driving the A 45 S. I’ve driven the A 35, and one thing I didn’t think that car needed was more power, let alone over 100bhp more.

The various engine upgrades are so complex and extensive that they take up 1,926 words in the official press release.

Highlights? ‘Nanoslide’ coatings for the cylinder liners to reduce friction, increased and class-leading turbocharger pressure, plus separate cooling systems for the cylinder head and crankcase. And that barely scratches the surface of its upgrades.

Away from the engine, the A 45 S gets an eight-speed dual-clutch automatic transmission that has whipcrack-fast gear changes, an all-wheel-drive system with a new rear axle differential, plus drive modes that change the car’s character. This includes a ‘drift mode’ that can help drivers get the car sideways.

Finally, there’s a sporty suspension system, which AMG has completely overhauled to provide better handling without sacrificing too much comfort, while upgraded brakes help rein everything in.

But enough with the technical analysis – all we really care about is the result of those upgrades. So what’s it like to drive? The car is delivered to my home a couple of days before our Road Test of the Year shoot properly begins, so I get a chance to experience it in daily driving duties first. When you read through all the upgrades, you expect the car to be too hard-core for the road. You think it’s going to be so stiff that it jiggles and jolts you across every road imperfection, but pop it into comfort mode and the A 45 S does a great job of pretending to be a boggo A-Class.

The sports seats are comfortable, the suspension softens up and the engine quietens down to a subtle burble. Driving more casually gives you a chance to soak up the excellent cabin, too.

However, shoot day comes and it’s an early start, which means empty roads as I take the scenic route – and suddenly that AMG character comes alive.

Turning the wheel-mounted dial to Sport sharpens everything. Sport-plus makes the throttle a bit too sensitive for my liking, but even in my favoured setting, the engine starts to behave like it’s necked a double shot of espresso.

It charges through to the red line accompanied by an aggressive exhaust note that could interrupt the sleep of any hibernating animals within a six-mile radius. Its pace is almost alarming at first. Your brain tells you a car this small shouldn’t accelerate this quickly, but once you’re tuned in you forget about that and realise you’re covering ground at a pace that would leave supercars a distant memory in your mirrors.

Criticisms? We’re driving the Plus model, which gets the adaptive dampers. I imagine my positivity about the ride wouldn’t be quite so forthcoming on the standard model, which is worth noting.

It’s also ludicrously expensive for a hot hatch, but when you look at what you get for your money it’s almost justifiable. That’s if you ignore the fact you’re looking at Toyota Supra or Porsche 718 Cayman money.

Despite this, if you really want the ultimate hot hatch, the Mercedes-AMG A 45 S makes a great case for itself. It has lairy looks, a lovely cabin and ballistic performance, but can relax into daily driving duties better than those sports cars. As an all-rounder, it’s pretty tough to beat.