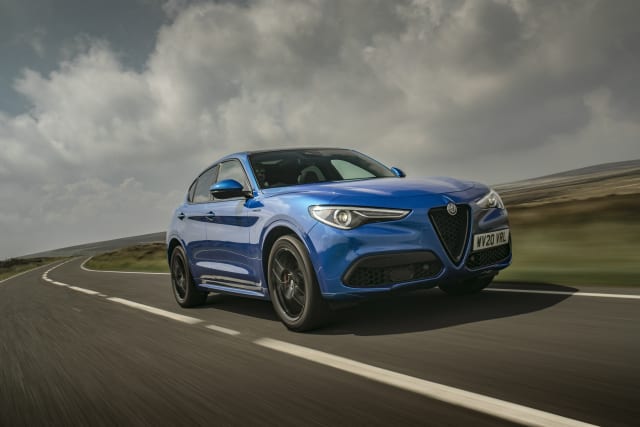 It was a sign of just how dominant SUVs had become when Alfa Romeo entered this segment in 2017, with its Stelvio. This Italian manufacturer is well-known for its sporting models and coupes, and as little as a decade ago, the thought of a high-riding model from the firm seemed impossible.

But here we are and the Stelvio exists as a classier and more stylish take on the SUV formula – impressing with its rewarding driving experience. But there were weaknesses with the original car, notably the infotainment and some suspect interior plastics. It’s something Alfa Romeo has tried to address with the updated car but has it succeeded? Let’s take a look.

Revised alongside the Giulia saloon, the latest Stelvio has an overhaul on the tech front – gaining new connected services and a range of new Level 2 autonomous driving features. These include the likes of adaptive cruise control, blind-spot monitoring and lane-keep assist.

New alloy wheels aside, very little has changed on the style front, but as the Stelvio still looks as fresh as the day it was unveiled some years ago, you can hardly blame Alfa for taking an ‘if ain’t broke, why fix it’ approach.

A selection of petrol and diesel engines are offered on the Stelvio, though it’s yet to benefit from an electrified option – something you’ll find on key rivals from Audi, BMW and Mercedes.

Here our test car uses a 187bhp 2.2-litre turbocharged diesel engine, which is mated to an eight-speed automatic gearbox delivering power to all four wheels.

It feels like quite an old-style diesel unit – not being especially refined, though it’s very smooth and the automatic gearbox is superb. Performance is decent, too – 0-60mph taking 7.4 seconds, and maxed out it would reach 130mph. In terms of running costs, Alfa Romeo claims it’ll return 44.1mpg, with CO2 emissions of 168g/km.

SUVs aren’t renowned for being especially good to drive, but the Stelvio is a strong exception to that rule. If you value enjoyment behind the wheel, it’s the car to go for in this class – feeling almost as agile and involving as a saloon, while staying especially flat through the corners, not rolling in the way you expect a top-heavy SUV to. It’s even good fun with a diesel engine under the bonnet, though we suspect a more powerful petrol unit would be a better-suited option.

The only downside to this sporty stance is that the Stelvio has quite a firm ride, though you may argue it’s a compromise worth making for a car that’s this involving. A narrow rear window also means visibility out of the back isn’t great, either.

Alfa Romeo successfully added some glamour to the SUV segment when the Stelvio first debuted, and even three years on it still looks as current as ever.

Next to somewhat bland-looking rivals like the Audi Q5 and BMW X3, the Stelvio’s sleek shape goes a long way. It also carries over some brilliant cues that this Italian firm is known for – including the triangle-shaped grille and offset front number plate. In terms of styling differences on this update, though, they are few and far between. A black grille and new alloy wheel designs are about as far as alterations go.

Things might not have appeared all that much on the Stelvio’s cabin, but the bits that have been altered are for the better. The material quality has improved throughout, with the scratchy and hard plastics of old being ditched in favour of much softer and more upmarket materials. It’s not up to Audi or BMW levels of quality, but the gap has certainly narrowed.

The 8.8-inch media system has also been overhauled and is now a touchscreen as well as being controlled by a central rotary dial. It’s a welcome improvement as it’s now far easier to navigate to before.

The Stelvio’s not quite so good at the practicality part of things, though. The 525-litre boot is a decent size, though rear space isn’t as generous as rivals, and it doesn’t feel much roomier than something like a Golf.

The Stelvio range kicks off at £39,620 – comfortably undercutting key rivals to the tune of several thousand pounds. For that, you get a ‘Sprint’ model and you won’t feel short-changed as it comes with 18-inch alloy wheels, an 8.8-inch media system with satellite navigation and smartphone mirroring, an electric tailgate and Bi-Xenon headlights to name but a few luxuries.

Our test car came in ‘Sprint’ specification, though, which is the next rung up the ladder and is the pick of the range with a £44,820 starting price. It brings larger 19-inch alloy wheels, heated front seats, a heated steering wheel, gloss black styling and electric front seats and feels deserving of its additional cost. Just try not to pick too many optional extras as it quickly ramps up the price.

The Alfa Romeo Stelvio remains a seriously likeable SUV – proving that a high-riding model can be both glamorous to look at and brilliant to drive, even with a sensible engine under the bonnet.

While it’s not especially spacious, or indeed as ‘premium’ as you might hope for, given the price, the tweaks to interior quality and technology have put it closer to its rivals than ever before, and make it a solid alternative if you dare to stand out from the crowd.