The winter Lamborghini: The Urus SUV is a supercar for all seasons 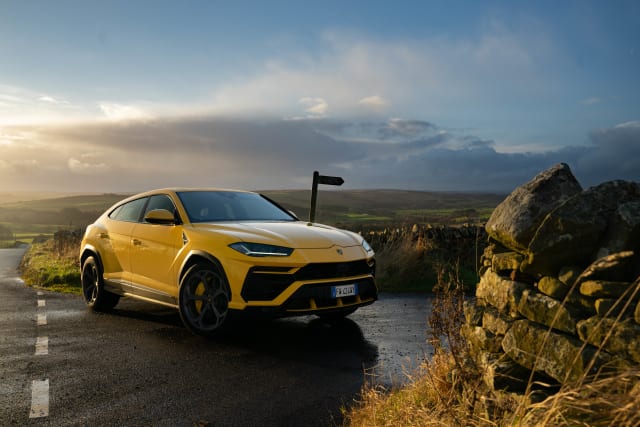 Traditionally, when faced with a winter road trip, you’d be considered mad to reach for the keys to a Lamborghini.

However, in 2020, any luxury car maker that doesn’t sell an SUV is missing out on a lucrative market. There’s the Bentley Bentayga, Rolls-Royce Cullinan, and soon even the Ferrari Purosangue.

But perhaps the most in-yer-face of them all is this, the Lamborghini Urus. When it went on sale two years ago it divided popular opinion – some loved how it took the Italian firm’s traditionally ostentatious styling and applied it to a family wagon, while others considered its sharp angles just plain awkward on an SUV.

However, as I’m passed the keys to this bright yellow, Italian-plated 4×4, I’m strictly in the former camp. The Urus is big and imposing, with that slatted front grille giving it an intimidating front end.

Many SUVs with distinctive styling struggle to fill that section between the middle and rear, resulting in a familiar silhouette, but the Urus’ sloping rear end works brilliantly with the aggressive angles throughout the rest of the car.

A quick way to upset Lamborghini is to draw comparisons with the Audi this SUV is based on. The Italian firm has sprinkled its magic throughout, both with mechanical upgrades and the fighter jet-like interior design. But there’s also some very Audi-like infotainment screens – no bad thing because they’re fast, clear and easy to use.

Even turning on the Urus is an event. It has the now-traditional red lever that you flip up before pushing the start button. The engine barks to life with all the subtlety you’d expect of a Giallo Auge-painted 4×4. Grab the right shift paddle to put the car into first and you’re away.

It’s mid-December north of the border – just after November’s national lockdown ended and just before tier four became a thing – and I’m mulling over the prospect of this epic road trip. The weather forecast is grim, but that’s perfect to find out if this really is the perfect winter Lamborghini.

But as I pull away the sun breaks through the clouds casting the most vibrant rainbow I’ve ever seen above the dealership – it’s all the colours of the Lamborghini Ad Personum back catalogue.

Our first experience of the car is on the tight streets of the city, where we blend into the background like a colourful crayon thrown among a collection of HB pencils.

The Urus feels big here. It’s easy to drive, but you’re well aware of the sheer scale of the thing, your eyes on stalks as two lanes become one and trams suddenly vie for space on the cobbled streets.

My attempts at Covid-safe sightseeing from a £144,000 SUV becoming increasingly exhausting, I head for the countryside to really stretch the Urus’ legs.

As the scenery opens up like something out of a fantasy novel the heavens open and a fine grey film is cast over the epic vista, forcing the windscreen wipers into overdrive and the four-wheel-drive system to earn its keep.

There are many drive modes, but the only ones you’re likely to use are strada (road), sport and corsa (track). There’s also an ‘ego’ mode that lets you choose your own settings for throttle response, steering response and suspension.

In strada mode I’m blown away by just how comfortable the Urus is. It has a Lamborghini badge, but you could easily forget that when cruising along in a relaxed mood at motorway speeds.

With adaptive air suspension it shouldn’t be a surprise, but seeing the bull badge on the steering wheel ahead of me and feeling so calm and relaxed still feels alien.

However, with the rain clouds merely a black ceiling to the bleak but beautiful view in the mirrors, it’s time to give sport a go. More theatre – you pull a chunky lever to switch modes and the car comes alive.

Under that bulging bonnet ahead sits a 4.0-litre V8 engine making an incredible 631bhp, contributing to a 3.4-second 0-60mph time and 190mph top speed. In sport, the throttle sharpens so the digital tachometer lights up like a Christmas tree when you plant your foot.

The eight-speed automatic gearbox snaps gears home with barely a moment’s hesitation and you’re catapulted down the road with giggle-inducing urgency. It’s not just fast for an SUV, it’s fast.

The clouds might have passed as we continue onwards, but their contents still cover the road ahead, and the Urus isn’t impervious to physics. It has wide, sporty tyres and massive 22-inch alloy wheels; four-wheel-drive can only save us so much.

Accelerating hard from low speeds sees the front end scrabbling for grip as the weight shifts rearwards, so you need to be alert to keep on the straight and narrow. It might have electromechanical active roll stabilisation, but particularly in strada mode, hard cornering induces some lean.

That said, once you get into the flow and learn to control the weight of the Urus, it’s easy to imagine keeping up with much more focused machinery, especially in these conditions.

I pass by a huge and sprawling which, while famous for its star gazing, is illuminated by the low December sun which is still in the sky as we pass through. It’s still stunning, and one of those places where you stop after every crest to take a photo, not realising the view will be surpassed about five miles down the road.

While some enthusiasts might roll their eyes at the thought of a Lamborghini SUV, the general public love it. Everywhere I go, people stop and stare. I lost count of the people taking photos on the motorway, speeding up to get alongside or waiting for me to head into a service station before poking around in the car park.

Their enthusiasm for this lairy yellow Lambo is matched by my own after a couple of days behind the wheel. Any doubts I had about its obnoxious styling are fully behind me, and it looks utterly brilliant covered in 500 miles of road grit.

It’s no replacement for a Huracan, for sure – there’s too much lean in corners and it doesn’t quite have the sense of occasion such exotics command. But for a daily driver that can sprinkle exhilarating performance and a raucous V8 soundtrack into your commute, it’s utterly fantastic.

The perfect winter Lamborghini? Nothing else gets close. When the world opens up again it would make the perfect companion for a cross-continental road trip at any time of year.