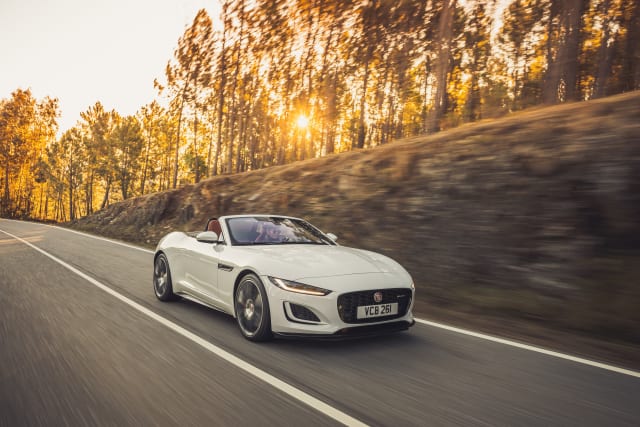 The Jaguar F-Type has been on sale for a good few years now, and in that time it’s been something of an underdog. Its talents are undeniable, but it rarely gets discussed in the upper echelons of sports car discussions.

It’s a shame, because it’s arguably one of the best-looking cars on sale today, with its sleek lines and sharp front end in the latest generation doing a great job of advancing the previous model’s more classic look.

We’re taking one for a spin today to see if it’s more deserving of being in the discussion with the elite – and on paper, coupled with those looks, it certainly seems like it should be.

Power comes from a 5.0-litre supercharged V8 engine making 567bhp and 700Nm of torque, sent to all four wheels through an eight-speed automatic gearbox. Other upgrades include an uprated chassis with new springs and dampers, anti-roll bars, rear knuckles and wider tyres.

The F-Type has always been more of a tourer than a track day weapon, and it’s clear to see that character is still intact. The steering is light – but not too light – and the ride is comfortable, making the Jaguar a pleasant companion for a casual cruise.

But with 567bhp on tap, a casual cruise was never going to last long. With the road opening up ahead of us, the temptation to floor it is too hard to resist. Pop the car into a sportier mode and the engine becomes more alert to your inputs, feeling like it;s straining at the leash to get away.

When you indulge it the reward is a burst of acceleration and an engine note that’s guttural and aggressive, at odds with the sleek and slender styling of the car. It puts a smile on your face, though, and makes every surge towards the redline an event.

However, it’s at the finer details where the F-Type loses the edge on its rivals. Despite its sleek looks it feels big and heavy behind the wheel, particularly in the steering, where turn-in feels quite lazy. It much prefers long, sweeping corners than being threaded down a tight, bumpy lane.

Lazy is the key word here, and it’s where you’ll either love it or opt for a rival. It’s fast and fun to hustle along, but if you’re looking for something sharp and agile, look elsewhere. Want a sports car that’s relaxing to cruise hundreds of miles in and fun for a quick blast when you fancy it? That’s where the F-Type might just be a class-leader.