First Drive: Is BMW’s M340d a sign that diesel hasn’t yet had its day? 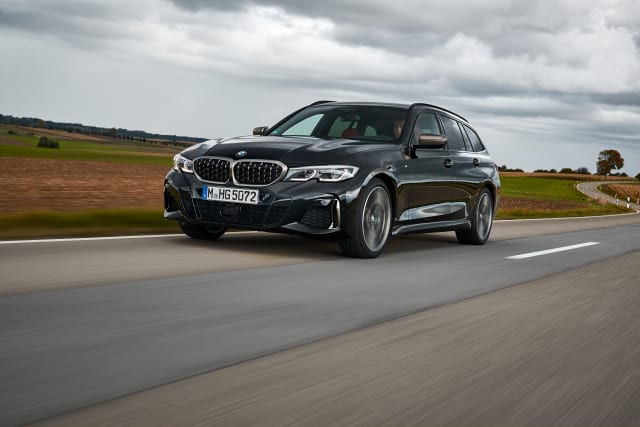 You might think that given the increasing popularity and emphasis on electric cars that manufacturers would be steering away from diesel. But BMW believes there's life in the old dog yet and as a result, has produced this – the M340d.

Essentially a more powerful version of its existing – and very good – 330d, this car brings even more performance yet without the high emissions you might associate with a car powered by the black fuel pump.So can a performance diesel still work in this day and age? We've been behind the wheel to find out.

As we already mentioned, the M340d is a more performance-orientated version of BMW's existing 330d. It means that the 3.0-litre engine has been tweaked to bring a higher overall output, while a 48-volt starter generator has been included to help bridge the gaps in torque delivery for smoother, more linear acceleration.

It benefits from adaptive damping too and an M Sport differential. But this isn't a car for attacking the circuit. No, this is a car which has been designed to offer effortless performance during the everyday drive.

The M340d uses a twin-turbocharged 3.0-litre straight-six diesel engine which produces a healthy 334bhp and 700Nm of torque. Power is sent via an eight-speed automatic gearbox to all four wheels via BMW's xDrive system, ensuring good levels of grip even in the most British of conditions.Those outputs result in a 0-60mph time of just 4.4 seconds and a limited top speed of 155mph.

Despite this, BMW says that the M340d can return up to 52.3mpg combined, while CO2 emissions stand at a company car-friendly 166g/km. Quite how this car can deliver economy figures like this despite offering supercar-scaring performance is scarcely believable, but, during our time with the car, this proved achievable.

With such a silky-smooth engine dominating proceedings, it's hard not to be won over by the M340d. When left to its own devices, the 3.0-litre unit whisks away without any real fuss while the automatic gearbox shifts smoothly and cleanly. The steering is well-weighted and direct, while the suspension – in its softest setting – is comfortable yet supportive enough to allow the car to manage with the worst potholes, yet corner without flailing all over the place.

But lean on that motor and there's a wealth of performance to take advantage of. The torque – all 700Nm of it – is the most noticeable aspect, providing the M340d with huge amounts of surge at impressively low revs. It makes overtaking a breeze, yet the overall refinement means that this 3 Series will sit at a cruise like any ordinary saloon, despite being able to give Porsches a fright away from the lights.

The latest-generation 3 Series is arguably one of BMW's best-looking vehicles in its current range and the M340d builds on this with a few select upgrades. The front grille has been given a new colour, while around the back there are single exhaust outlets at either side of the rear bumper. However, this is by no means a car to turn heads with. It's almost refreshingly subtle, despite the performance it offers, which will no doubt prove appealing for many drivers.

Despite being available in saloon layout, we'd argue that – to our eyes – the estate form in which our test car came in looked even better. This latest 3 Series is a brilliantly well-proportioned car in 'wagon' form and feels just about perfect in size for the UK's roads.

The interior of the M340d is plush and comfortable. Most importantly, it's spot-on when things turn to ergonomics, with an excellent driving position. The steering wheel, though a little too thick perhaps, is adjustable while the seats go nicely low in the car.

Plus, everything feels well made and tightly screwed together. It should, too, given that the M340d starts from £53,420, and our test car – with features such as a head-up display and optional gloss black alloys – tipped the scales at £61,645.

However, if you want a practical performance car, then this is a great option. Boot space stands at a respectable 500 litres with the seats up and the M340d retains one of the standard 3 Series' features – a split section tailgate which allows you to access the boot by opening the glass section instead of the entire boot door.

Effectively the tip-top diesel 3 Series, the M340d brings a whole host of standard equipment though, as we mentioned, 'our' car came fitted with all manner of optional extras to help heighten the driving experience. The Technology Pack, while expensive at £1,900, is a worthy addition to the car, bringing features such as a head-up display, upgraded speakers and wireless charging.

We'd be less inclined to opt for the Shadowline Plus pack. At £750 it might not break the bank, but it only brings gloss alloy wheels and black mirror caps. Given that the M340d looks good as standard, this is a saving worth making.

The M340d might seem like a bit of a dinosaur in terms of powertrain, but it's certainly a showcase of the merits of diesel power and the efficiency that it's capable of delivering. It's such a multi-purpose vehicle, bringing refined and comfortable motoring yet with the capability for delivering serious performance at a moment's notice.

It's a fitting flagship for BMW's range of diesel-powered 3 Series models, that's for sure, and is one which really goes to show that there's life in the fuel. Diesel's days might be numbered, but the M340d is a shining example of just what it can offer while it's still here.