What is a hydrogen car and how do they work? 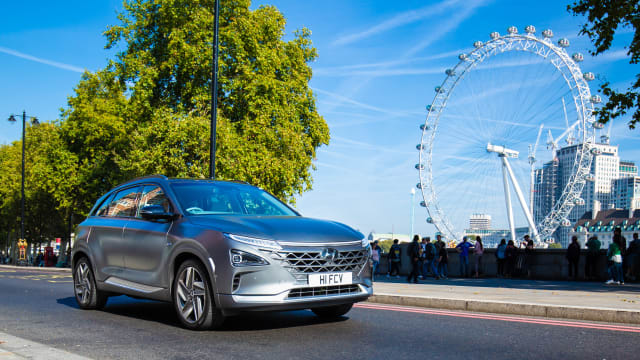 When it comes to the zero-emission vehicles of the future, electric vehicles are often discussed as the only option.

However, there’s another choice – hydrogen. Few manufacturers have hydrogen-powered vehicles on sale and there are just 17 fuelling stations in the UK according to HydrogenHub.org.

Some manufacturers are committed to it, though, and think it has a crucial role to play in the future fuel mix. So how does a hydrogen-powered car work, and what cars can you buy?

How does a hydrogen-powered car work?

As the name suggests, these vehicles use hydrogen as a fuel. However, while they are seen as an alternative to an electric vehicle (EV), the reality is that they use a very similar powertrain.

The hydrogen is stored in a tank within the car, similar to a typical petrol or diesel car. An electric motor is powered by a battery like in an EV, but the battery is much smaller.

That’s because a hydrogen fuel cell is attached to it. The hydrogen in the tank is fed into the fuel cell where it is mixed with oxygen. This chemical reaction creates electricity, which tops up the battery, with the only emission being water.

The tanks can be refuelled in much the same way as you would a petrol or diesel vehicle, taking a similar amount of time and similar cost.

What are the pros and cons of hydrogen?

One of the key advantages of hydrogen is that refuelling is similar to petrol and diesel vehicles, rather than the potential hours you could have to wait to top up an electric vehicle. This has big advantages for long-distance driving.

There are also no harmful emissions, the powertrain is efficient, and tanks typically provide a range of over 300 miles, something only the priciest EVs can manage.

However, there are some downsides. The lack of infrastructure is a key one. If you thought the UK’s EV charging infrastructure was poor, for hydrogen it’s even worse right now.

It’s also expensive. For customers, refuelling is more expensive than topping up an EV but costs about the same as traditional fuels. However, storing and moving hydrogen, as well as developing the technology, costs a lot which can also drive up the price of the car.

What hydrogen cars can I buy?

Your choices are limited to just two in the UK currently. There’s the Toyota Mirai, which is a large saloon, and the Hyundai Nexo crossover. Both cost almost £70,000 – though finance, leasing and business deals can make the price more reasonable.

Honda built the Clarity fairly recently, but just two came to the UK for research purposes so there are none on the used market unless you look abroad. Meanwhile, Toyota is using the Mirai fuel cell technology in truck prototypes in America. But for now, your choices are limited.