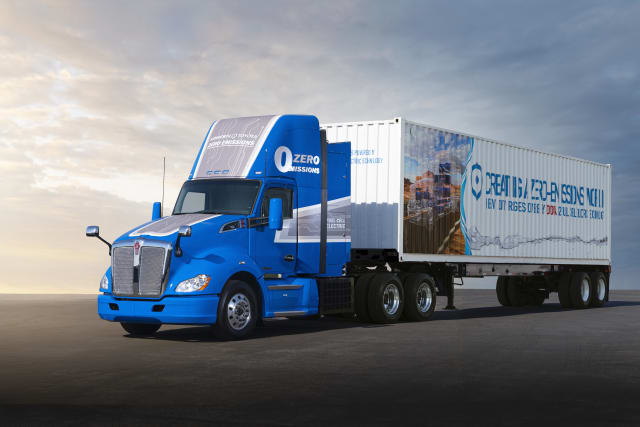 The Japanese manufacturer has been testing the vehicles in the Ports of Los Angeles on short-distance freight routes, and has just introduced its second-generation powertrain.

It’s based on the same system used in the Toyota Mirai, a hydrogen-powered car, but has a flexible design that could be used by different truck manufacturers.

Like previous prototypes, the new models use modified Kenworth T680 chassis with six hydrogen fuel tanks. These provide a range of 300 miles with a full load of 36.3 tonnes.

However, a new lithium-ion battery has been added that provides a smoother power delivery to the electric motors. Hydrogen vehicles use a battery and motor system similar to fully electric vehicles, but the battery is fuelled by the hydrogen tanks.

Andrew Lund, chief engineer of Toyota North America Research and Development, said: “This is an important step in the transition to emissions-free heavy-duty trucks.

“Our first prototype trucks proved that a fuel cell electric powertrain was capable of hauling heavy cargo on a daily basis. These new prototypes not only use production-intent hardware, they will also allow us to start looking beyond drayage into broader applications of this proven technology.”

Toyota has been testing hydrogen trucks at the Ports of Los Angeles since April 2017 as part of a plan to reduce emissions at ports in America. At the time, it was noted that 16,000 pollution-emitting trucks service the ports of Long Beach and Los Angeles, a number that is expected to double by 2030.