The new Moto Guzzi V7 has been launched online 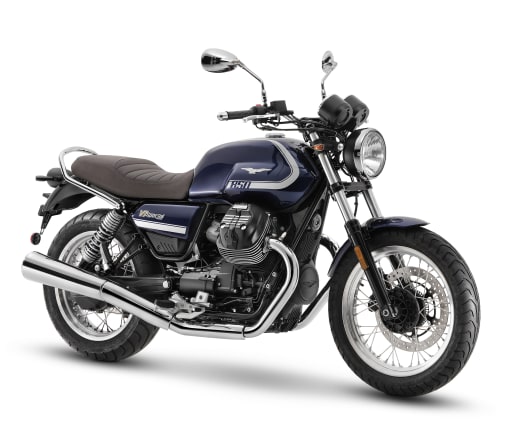 Moto Guzzi has launched an overhauled version of its V7 motorbike.

The Italian bike manufacturer says this new model is such a comprehensive upgrade that it has ditched the generations from its nomenclature, so this is an almost entirely new motorcycle.

Two versions will be available, called V7 Stone and V7 Special, with Moto Guzzi describing them as ‘strong and minimalist’ and ‘classic and elegant’ respectively.

Each bike will debut a new engine, which is based on the one used in the V85 TT model and provides better performance as well as efficiency.

Power has been increased on the outgoing model by 25 per cent, which is now 64bhp at 6,800rpm – a slightly higher red line. Maximum torque has also been increased, going from 60 to 73 Nm.

The engine also changes the look of the bike because it’s bigger than before, also featuring larger exhaust piper. It also gets a wider rear wheel, more robust Kayaba shock absorbers, new side panels and a new rear mudguard.

Moto Guzzi have made changes that it claims improve stability and comfort, with the new shock absorbers providing longer travel and a two-tier saddle.

Up front, there’s a new LED headlight system with daytime running lights shaped like the Moto Guzzi Eagle, while the instruments use a clean digital design.