UK Drive: The Mercedes-Benz A-Class PHEV has premium appeal but a poor powertrain 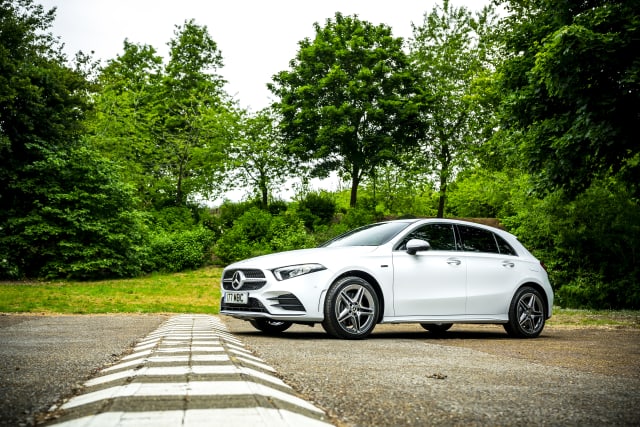 It doesn’t seem like all that long ago when the idea of a Mercedes-Benz being one of the best-selling cars in the UK would have been beyond reach. The brand has a traditional reputation for building pricey, premium models, but with the A-Class as an entry-level model, the hatchback has proved mighty popular and regularly features in the list of top-sellers each month.

With the addition of a plug-in hybrid powertrain promising incredibly impressive fuel economy, is this yet another reason for the A-Class to top the sales charts?

This is the first time the A-Class has been given the EQ Power badge Mercedes applies to its electrified models. This being a late addition to the existing A-Class range, there’s not a great deal outside of the powertrain that’s new.

The headlines, then, are the new petrol-electric setup, charging infrastructure integration into the sat nav, and the fact this is the first Mercedes that is started using the electric motor rather than a separate 12-volt starter motor. It also has some clever packaging of the exhaust so the batteries don’t eat into boot space too much.

So let’s talk about that powertrain. This is a plug-in hybrid unit that twins a 1.3-litre petrol engine with an electric motor, making a combined 215bhp and 450Nm of torque. It has a 15.6kWh battery that can be topped up within 1h 45min at a 7.4kW home wallbox, and can provide just over 40 miles of range, which is impressive.

Fuel economy figures are always dependent on how you use the car, but it’s particularly true of PHEVs – official numbers are high, and can usually be achieved if you keep the batteries topped up. In the A250e, these figures are 202mpg with CO2 emissions of 33g/km.

With a full battery and running on electric power, the A250e is silky smooth and refined. The electric motor pulls eagerly and can take a fair amount of throttle before calling on the petrol engine. At steady motorway speeds, that engine settles quietly into the background.

However, at all other times the powertrain is by far the weak point in the package. The transition between electric and engine isn’t particularly smooth, while accelerating with the engine results in a coarse, unrefined sound that’s about as far removed from the premium Mercedes driving experience as it’s possible to get.

Since this makes up about 90 per cent of driving time, it’s a downside that’s tough to ignore. And that’s before you think about the lethargic gearbox that always feels one step behind…

Mercedes has really nailed the styling of the latest A-Class. Previous generations have arguably been a little frumpy, but the latest model has a sleek design that’s much better-suited to the badge on the bonnet.

The large front grille with the prominent badge, the slim headlights and curvy rear lights give it a modern, premium feel. The A-Class has been on sale for a while now, yet the styling still looks fresh, which is testament to good design.

Inside, the positives continue. It’s typical A-Class fare throughout, with high quality materials used in all the right places, with a decent mix of physical buttons and modern touchscreen technology. It really helps to elevate the sense of quality without frustrating by hiding essential features deep within menus.

There are a few concessions to small car life, with the odd piece of shiny plastic you wouldn’t find in the firm’s more expensive models, but overall it does a great job of bringing the Mercedes experience to the hatchback market. Meanwhile, those twin screens atop the dashboard are something you’ll struggle to find competition for in this segment.

These EQ A-Classes are only available in four AMG Line trim variations, so they’re generously specified – which they should be, considering prices start at a whopping £32,990.

Add £1,500 to step up to AMG Line Executive and you get smartphone integration, 10.25-inch touchscreen display, parking and mirror packages and wireless charging. AMG Line Premium starts at £35,990, and includes the digital cockpit, augmented navigation, keyless entry and an advanced sound system.

With enticingly low running costs, the plug-in hybrid version of any model becomes mighty appealing – particularly when it’s one of the UK’s best-selling cars. And with stylish looks inside and out, the A-Class makes a compelling case for itself.

If you can largely stick to EV mode it’s easier to forgive its foibles, but there are better drives and better deals to be had elsewhere.