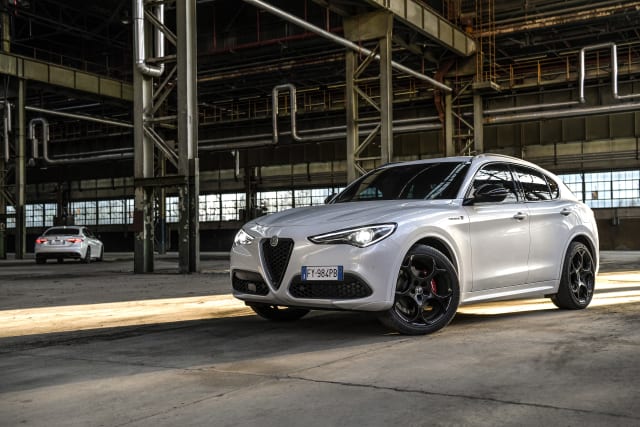 Bringing the looks of the range-topping Quadrifoglio but with a more frugal engine, the Veloce Ti comes with a high level of standard equipment.

New 21-inch five-hole alloy wheels are available for the first time and are fitted alongside a new diffuser, body-coloured bodykit and redesigned bumper for a more dynamic look.

Inside, the Veloce Ti mimics the Quadrifoglio with its aluminium gearshift paddles, leather and Alcantara sports seats and a variety of carbon fibre accents. The window surrounds have also been finished in dark colours, while tinted windows and black exterior badging give the car a distinctly undercover look.

As standard, the Veloce Ti comes with a 2.0-litre turbocharged petrol engine with 276bhp, linked to an eight-speed automatic transmission and an all-wheel-drive. The four-cylinder unit is created entirely from aluminium and features a lightweight carbon fibre drive shaft.

Coming alongside the release of the Veloce Ti, Alfa has also updated the engines across the Giulia and Stelvio range to ensure that they comply with the latest Euro 6d regulations.

In addition, more Alfa Connect Services have been added to both ranges of cars, bringing features such as ‘My Assistant’ which can automatically call the emergency services should the vehicle detect a collision and ‘My Remote’ which allows the owner to control some of the car’s functions – such as the central locking and lights – via a smartphone app.

Pricing information on the Veloce Ti – as well as for the wider Alfa Romeo line-up – is set to be announced in January.