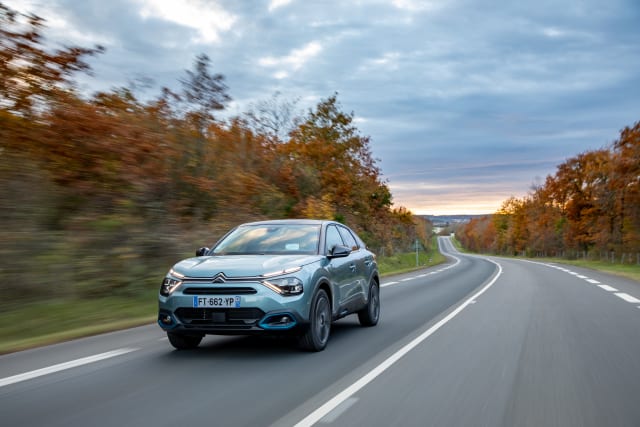 Manufacturers need to acknowledge the electric future that we’re all heading towards. Many have been busy bringing all manner of EVs to market but Citroen has remained largely quiet, save for three electric commercial vehicles and a hybrid version of its C5 Aircross SUV.

However, that’s set to change with this – the e-C4. An electric version of the firm’s latest C4, it aims to provide buyers with an EV which is well-suited to daily use. With a decent range and eye-catching looks, it certainly ticks many of the initial boxes, but is it the complete package? We’ve been behind the wheel to find out.

The new C4 is a far more upright proposition than the previous generation car, bringing a more crossover-style appearance compared with the older C4. As a result, the e-C4 has a more commanding presence on the road than before, adding a quirky exterior style which we’d expect from the French manufacturer. The same applies to the interior, which combines some elements we’ve already seen on Citroen’s vehicles with fresh, new additions which help the e-C4 to feel far more special than you might think.

The C4 is part of Citroen’s multi-powertrain policy too. So despite sitting on the same platform, it’s available with the choice of petrol, diesel and – in our case – electric power.

The e-C4’s electric powertrain combines a 100kW electric motor with a 50kWh battery pack. Citroen claims that you should get 217 miles from a single charge, while thanks to CCS rapid charging compatibility, an 80 per cent top-up can take as little as 30 minutes via a 100kW charger. Use a home charger and a full charge will take seven hours and 30 minutes. Plus, Citroen is offering a free home wallbox with each new e-C4 – a tempting proposition given the £500 saving it brings.

When it comes to performance, the e-C4 is around what you’d expect from a hatchback of this size. Zero to 60mph comes in just under nine seconds, while flat-out it’ll do 93mph.

Citroen has cleverly made the driving experience of the e-C4 much like the one you’d get from a ‘regular’ car. Yes, moving away the car remains silent, but the steering and brakes feel far more akin to those you’d find on one of Citroen’s conventionally-driven cars than you’d expect. The steering, for instance, is light – usefully so for city drivers – while the brakes aren’t overly sharp. They don’t regenerate as harshly as with other electric cars, either.

The performance is brisk enough, too, but not other-worldly. It feels, in truth, like the kind of acceleration you’d get from a regular hatchback. The ride is comfortable – thank Citroen’s progressive hydraulic cushions for this – at moderate speeds, though despite that setup the e-C4 sometimes struggles to disguise the additional heft of the batteries at slower paces, such as when going over speed bumps.

As we’ve already alluded to, the new C4 is a strikingly different proposition when it comes to appearances compared with the car it replaces. For starters, it rides far higher up than before, toeing the line between hatch and crossover. It’s still recognisable as a Citroen, of course – that huge front grille is hard to miss – and it’s a design which is bound to get heads turning and tongues wagging.

The heavily raked roofline contributes to a sleek overall look, though it does impact over-the-shoulder visibility considerably, and the rear spoiler – situated in the middle of the rear screen – does impede your view out of the back of the car, too. As with many past Citroen cars, some styling touches have come at the expense of outright usability.

The interior of the e-C4 is a great mix of high-end screens and clever layouts. Ahead of you sits a clear and easy-to-read driver display and this is fitted alongside a sizeable central touchscreen which houses all of the main infotainment features. The material quality is good in general, though some harsher plastics have been used in areas such as the door cards and around the ventilation controls.

The seating position is good and the seats comfortable, though the small gear selector is a touch on the compact size and can be tricky to operate, particularly when in a hurry.

Back seat passengers will find themselves well catered for in terms of legroom, however that sloping roofline does impede on headroom a fair amount. Taller people sitting in the back will struggle to get comfortable, in fact. However, children and shorter adults will find there’s more than enough space.

Then, when it comes to the boot, things look good. There are 380 litres as standard, rising to 1,250 litres with the rear seats folded flat. Plus, as it’s a split-level load area, the car’s charging cables can be neatly stored underneath the main boot floor, keeping them away from your luggage and, in general, freeing up space.

Given that it starts at a respectable £29,180 after the government’s plug-in car grant, the e-C4 offers an impressive amount of standard equipment. All cars start at ‘Sense Plus’ specification, which brings LED headlights and daytime running lights, that 10-inch infotainment screen (which incorporates Apple CarPlay and Android Auto) and advanced comfort seats which aid the car’s back-saving measures.

‘Our’ car came in Shine specification – which starts from £30,130 – adding a head-up display, live traffic information, dark tinted rear windows and keyless entry. Front and rear parking sensors now come as standard too, as does adaptive cruise control and a heated steering wheel. In truth, though, most will find the standard car’s specification more than enough and particularly attractive given its lower price.

The e-C4 is a unique proposition in the EV segment as it’s an electric car which doesn’t feel particularly like an electric car. Yes, it’s quiet and refined like only a battery-powered car can be, but the way it steers and brakes is far more like a conventionally-driven car than you might expect.

This makes it the ideal car for those wanting to make the jump into electric car ownership. It’s not so detached from the kind of motoring we’ve been used to for decades as to feel alien, yet it’s also fitted with many high-tech features to ensure that it remains exciting. Add that to a sub-£30,000 entry price and a 200-mile-plus range, and you’ve got a car which could prove particularly attractive for those who have been considering an EV but have yet to take the plunge.