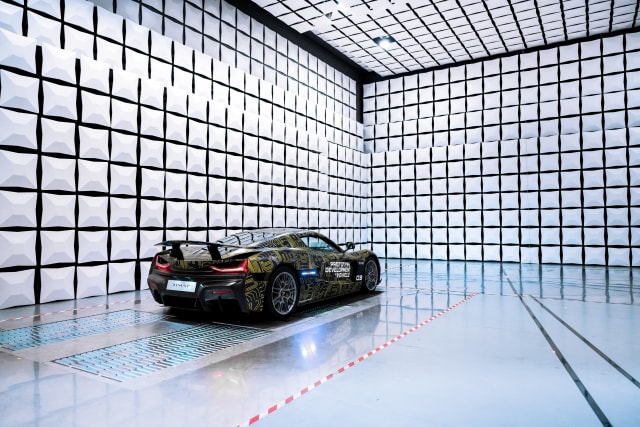 A Rimac C_Two prototype has been pictured undergoing lab testing in Germany as the production model gets ever closer.

The electric supercar is scheduled to begin being delivered to customers next year and is undergoing testing for homologation, which allows it to be sold in various markets around the world.

The latest work has been ElectroMagnetic Compatibility (EMC), which has become vital for electric vehicles and connected cars.

This involves testing every aspect of electronic devices, from the emissions they produce to how they respond to inputs.

Items must pass specific EU regulations, but Rimac says it works to improve on these. To achieve this, it starts with industry-standard solutions at the initial design stage before upgrading with its own parts.

To test the C_Two, it is placed in a semi-anechoic EMC chamber, which completely cuts it off from outside interference. This allows sensors to record data without worrying about whether any information is leaking in from the outside world.

The vehicle is driven within the chamber and subjected to small radiation levels. Items such as the air conditioning, lights and wipers are turned on at specific intervals to see if they perform as expected.

Engineers disassemble the car after the test and analyse the performance of each part to see where improvement can be made.

The Rimac C_Two is an electric supercar with astonishing performance figures. The motors make 1,887bhp and 2,300Nm of torque, which contribute to a 1.9-second 0-60mph time and a top speed of 258mph.